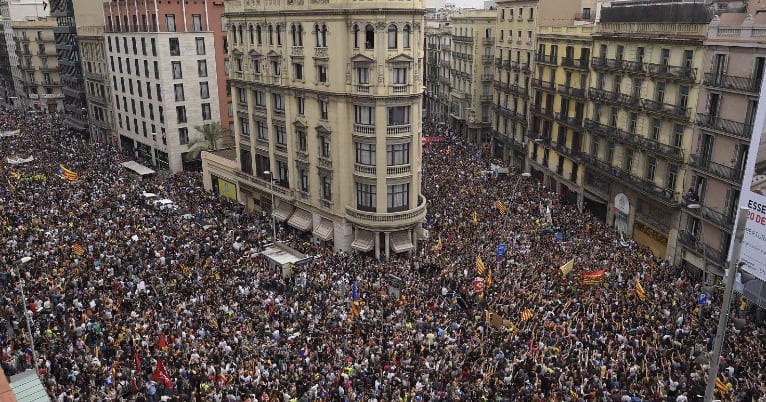 CATALONIA’S REFERENDUM concluded Sunday night with violence in Barcelona, the Catalan capital, amid the deep uncertainty about everything from the integrity of the vote to the meaning of the result. The Catalan’s have spoken, spilled their blood and defied the Spanish government with a vote for independence.

Despite claims from Spain’s central government in Madrid that the referendum was illegal and the result would not be recognised, a spokesperson for the Catalan regional government announced early Monday morning that 2,262,424 valid votes had been cast and counted — 90 percent of them in favour of independence from Spain.  In this vote 840 people have been injured in dramatic clashes with riot-gear-clad national security forces.

The images from Spain this weekend have shocked the world — and many Spaniards, too. Yes, Prime Minister Mariano Rajoy had warned unequivocally that he would not allow Catalonia’s independence referendum to go ahead. Yet despite the crescendo of tensions ahead of Sunday’s vote, few expected to see bloodshed, much less on such a large scale.

These shocking scenes look similar to the streets of London, only a few years ago, perhaps not quite as violent but shocking brutal unapologetic force in applying the ‘rule of government.

Catalan’s leaders appear determined to defy the King of Spain and go ahead with a unilateral declaration of independence — a move that would steer the country’s deepening constitutional crisis into uncharted waters.

The office of the Catalan President Carles Puigdemont responded from a warning from the monarch, that Catalan leaders had acted “outside the law” of Spain by holding a banned referendum on independence.

Puigdemont, then told the BBC that an independence declaration would come within days, is due to address Catalans in a TV broadcast from Barcelona on Wednesday evening.

King Felipe’s TV speech was unexpectedly hard-line — he accused pro-independence leaders of “unacceptable disloyalty” and made no mention of the nearly 1000 people injured in clashes with Spain’s national security forces. Instead, the monarch blamed the referendum’s organisers for the strife.

Rajoy has the option of imposing direct rule on Catalonia under Article 155 of the Spanish constitution, drawn up after the Franco military dictatorship was toppled in 1975. Regions like Catalonia and the Basque country were given sweeping freedoms and control, but the constitution also protected the integrity of Spain and gave Madrid powers to seize back control if regions acted beyond the law.

The King’s address made it clear that he supported the stance of Rajoy, who has refused to entertain dialogue with the Catalan authorities.

The region is semi autonomous similar to Scotland, But not quite the same as independence. The Catalonia have its own police force, the Mossos d’Esquadra. It has its own broadcast regulator, and even boasts a series of foreign “missions” – mini embassies that promote trade and investment in Catalonia around the world. Catalonia delivers some public services already – schools and healthcare.

If the Catalans did get their Independence they would have so much to set up. Like Border control, International relations, Military Defence, A central bank, Tax & Inland revenue. Air traffic control. Which are currently run by Madrid would all need to be setup and institutionalised.

Catalonia is certainly rich compared with other parts of Spain. It is home to just 16% of the Spanish population, but 19% of its GDP and more than a quarter of Spain’s foreign exports. Barcelona is one of the EU’s top 20 ports by weight of goods handled.

The Spanish government set up a special fund to provide cash to the regions, who were unable to borrow money on the international markets after the financial crisis. The Catalan government owes €77bn (£68bn) which is 35.4% of Catalonia’s GDP.It punches above its weight in terms of tourism too – 18 million of Spain’s 75 million tourists chose Catalonia as their primary destination last year, easily the most visited region.

Regions like Catalonia, which is a major component of the Spanish economy, feel shortchanged by the national government. Catalans have their own language, their own history. They also have a shared history with Spain, and a great deal of autonomy.

Catalonia’s economic power could also depend on whether it continues to be part of the EU – or at least the single market. And to do this it would require all EU members to agree – including Spain.

Disentangling Catalonia’s economy from Spain’s is a huge issue, but one that is secondary to giving this movement for independence a chance to exist by getting Madrid to sign off on elections. The ultimate test of political maturity is resolving conflicts without violence.

In Western Europe alone there are independence movements eager to bring about their own break with central governments. The world should keep watching and learning from Spain’s grievous error.