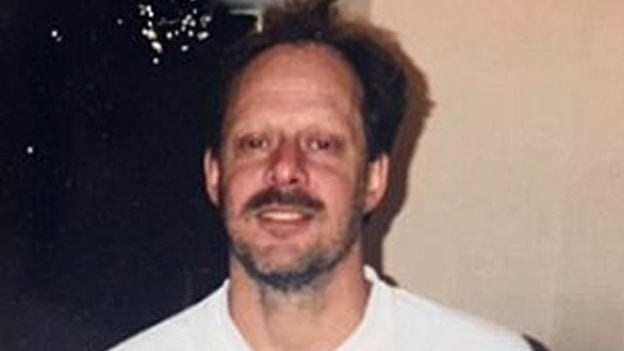 Stephen Paddock the Terrorist who devastated Las Vegas. Devastating and Destructive that even ISIS want to claim him as one their own.

The massacre that hit city of Las Vegas has shook the world and again brought America’s Gun Law’s into the spotlight and it’s double standards. The police are still investigating how this all happened, one thing is true, the coward Terrorist killed himself before the police could get to him.

Last night’s massacre in Las Vegas was the worst in America’s most hideous gun-related massacres, it was tragic.

So far 59 dead, over 500 wounded and counting, but the world has started waking up to the double standards by the principal authorities namely the Government and President over how to treat these crimes.

The disturbing scenes from Vegas should be a wake up call for the authorities, and alongside all that destruction and devastation lies a debate where President Trump refuses to call the maniac Stephen Paddock a Terrorist.

Mass shootings in the US have steadily increased in number and size in recent years. And gun laws are becoming more relaxed.

The police discovered a mini arsenal in his hotel room, they found 23 guns in his room and more firearms and explosives at his home. enough ammunition for Rambo to take out Vietnam again. Incidentally, he was branded a vigilante terrorist in Rambo, First blood.

They also found ammonium nitrate in Stephen Paddock’s car the chemical compound used in fertilisers but is used by terrorists to make bombs such as that used in the 1995 Oklahoma City attack. The quantity of ammonium nitrate was enough to assume that.

Mehdi Hassan the political commentator for Al Jazeera immediately pointed to the humanising of the killer, something that is never done to a so called Muslim Terrorist.

The #lasvegas shooter lived a "quiet life" & enjoyed "country music". Can you imagine a Muslim shooter being so quickly humanized like this?

Piers Morgan iterated similar sentiments and to his applause it is not the first time he has done so. He then interviewed a pro-gun campaigner with Kinder Egg live on ‘Good Morning Britian’ and shut him down.

.@piersmorgan: If a Muslim terrorist had committed this Vegas atrocity we'd have a slew of new laws in a heartbeat https://t.co/rv54JADy92 pic.twitter.com/mPtnijqjpu

didn't think i'd ever agree w/ piers morgan on anything, but as the cliche goes… https://t.co/snzULTDNhl

And as the rest of the world is outraged by this deadly attack, President Trump has done very little apart from a hashtag a few tweets and made this statement to a pool of journalists as he was about to board his Helicopter.

President Trump said Paddock was “a sick man, a demented man. Lot of problems, I guess, and we’re looking into him very, very seriously”.

When asked by another journalist, Mr Trump declined to call the attack domestic terrorism. And then moving onto the issue of tighter gun control, the president said: “We’ll be talking about gun laws as time goes by.”

This act of terrorism was so vulgar in its nature that Islamic State claimed that they were behind the attack, making outrageous claims  that Paddock had converted to Islam. But as the FBI and other authorities have clarified, IS  are using this as a false victory to further their cause. It is something that many have suspected that IS claim responsibility over any kind of terrorist attack, especially against the UK and USA and now it seems to have become more common.

The undeniable crazy act that is dividing opinion between the world and The Presidency did devastated the Vegas strip. The Terrorist gunman killed 59 people and injured 527 on Sunday, with hundreds more thought to be suffering in shock and trauma following the horrific events that shook the world.