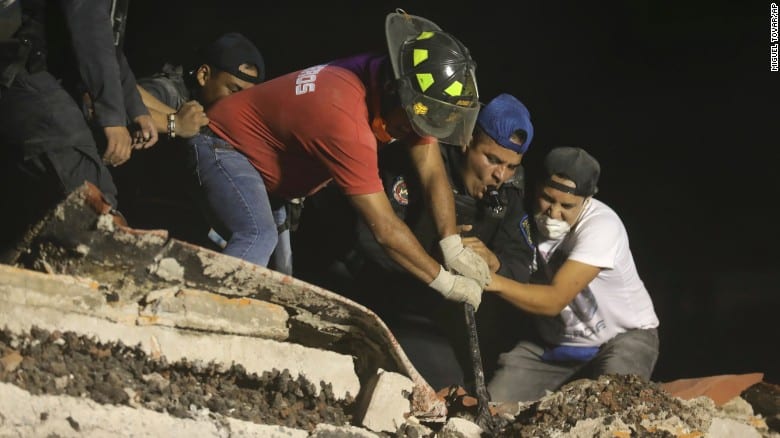 Rescuers searched for survivors through the night after Tuesday’s powerful earthquake shook Mexico City and surrounding states, killing scores and leaving many trapped under collapsed buildings.At least 226 people died in Mexico City — the country’s capital — and in the states of Puebla, Mexico and Morelos, officials said.

The epicenter of the 7.1-magnitude earthquake was 2.8 miles (4.5 kilometers) east-northeast of San Juan Raboso and 34.1 miles (55 km) south-southwest of the city of Puebla, in Puebla state, according to the US Geological Survey.

President Enrique Peña Nieto said 22 bodies were found in the debris of an elementary school in Mexico City that collapsed due to the earthquake. At least 30 children were still missing Tuesday night, he said.

All public and private schools in Mexico City and some of the states affected by the earthquake will remain closed until further notice, Education Minister Aurelio Nuño tweeted.

Tuesday’s earthquake took place on the anniversary of a devastating earthquake that killed thousands in Mexico City in 1985. Just hours before the quake hit, many people took part in drills and commemorative events.

“God bless the people of Mexico City. We are with you and will be there for you,” US President Donald Trump tweeted.

The death toll of 226 was confirmed on Twitter by the country’s national co-ordinator for civil protection. It includes at least 55 people killed in Morelos state, south of the capital, and 39 reported killed in Puebla state. One hundred and seventeen are also confirmed dead in Mexico City, with another 12 in Mexico State, and three dead in Guerrero.

About two million people in the capital were without electricity and phone lines were down. Officials also warned residents not to smoke on the streets as gas mains could have been ruptured.

Mexico City is one of the most densely populated cities in the world, with more than 20 million people living in the metropolitan area.

Latest News As it Breaks