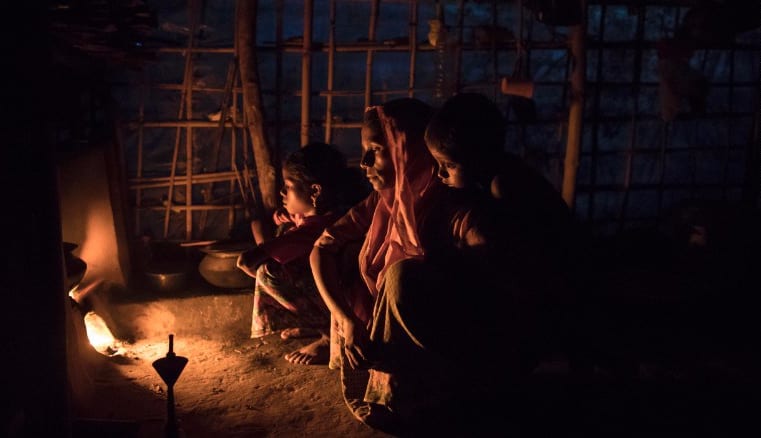 Myanmar’s Aung San Suu Kyi to miss UN General Assembly debate – should she have been barred?

Some 370,000 Rohingya Muslims have fled Rakhine state for Bangladesh since the outbreak of violence last month. Whole villages have been burned down.

The government has been accused by the UN of ethnic cleansing. A clearance operation by Myanmar’s military targeting the Rohingya intensified in the past month, with thousand of innocents killed.

Myanmar’s military says it is fighting Rohingya militants and denies reports that it is targeting civilians.

The Rohingya, a mostly Muslim minority in Buddhist-majority Rakhine, have long experienced persecution in Myanmar, which says they are illegal immigrants. They have lived in Myanmar for generations but are denied citizenship.

Ms Suu Kyi has been criticised by former supporters in the West for failing to do enough to prevent the violence. The UN Security Council is due to meet on Wednesday to discuss the crisis.

The Nobel Peace Prize winner, who lived under house arrest for 15 years for her pro-democracy activism, is widely seen as the head of government. Suu Kyi has been repeatedly criticized over her response to the crisis, particularly given her previous work as a defender of human rights which won her the Nobel Peace Prize.

Fellow Nobel laureates, including the Dalai Lama, Archbishop Desmond Tutu and Malala Yousafzai, have called on Ms Suu Kyi to stop the violence.

On Tuesday, Bangladesh’s Prime Minister Sheikh Hasina visited some of the hundreds of thousands of Rohingya refugees currently sheltering in her country, condemning “those who are responsible.”

The Bangladeshi PM was just one of 56 Islamic leaders to condemn the violence against Rohingya Muslims in a joint statement Tuesday. The statement calls for a “thorough and independent investigation” into the violence, and was issued after an emergency meeting of the Organisation of Islamic Cooperation, the world’s largest Muslim body.

The leaders of Turkey, Pakistan and Iran were among the signatories.

Myanmar’s de facto leader Aung San Suu Kyi has said her government does not fear “international scrutiny” of its handling of the growing Rohingya crisis.

In her speech in English to Myanmar’s parliament, Aung San Suu Kyi said she felt “deeply” for the suffering of “all people” in the conflict, and that Myanmar was “committed to a sustainable solution… for all communities in this state”.

The Rohingya, particularly those in camps around Sittwe, have long been denied access to the most basic services, in particular healthcare.