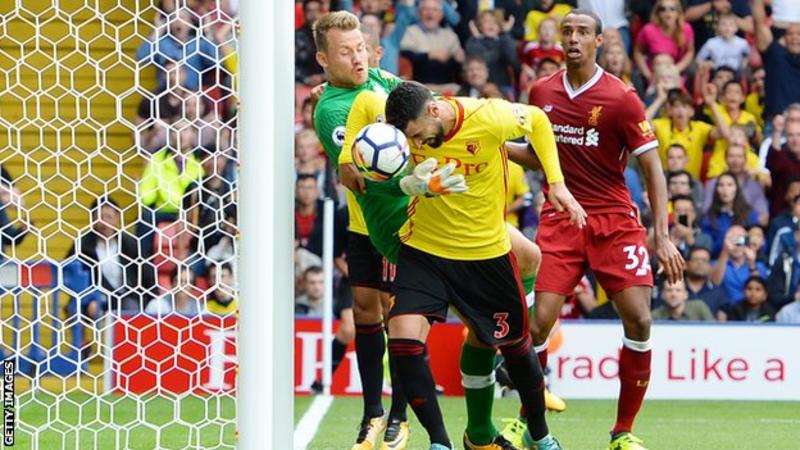 Britos on hand to head the ball over the line and spark wild celebrations in the stands.

As good as Liverpool were at going forward, their defensive frailties – which arose time and again last season – came back to haunt them.

Britos scored a dramatic 93rd-minute equaliser for Watford as Liverpool were held in a thrilling game at Vicarage Road. A goal on his competitive debut from Mohamed Salah was not enough for Liverpool to open their Premier League season with a win, as Watford snatched an injury-time equaliser in a pulsating 3-3 draw on Saturday.

The Reds fell behind to Stefano Okaka’s header inside the first 10 mins, after failing to defend the first corner of the match. Then Sadio Mane equalised with a clinical finish following a lovely flick by Emre Can before scoring from an angle. And you could see signs of Liverpool’s magic; pace, movement and skill all at high speed.

It was Liverpool’s first serious attack of the game yet moments later only for Abdoulaye Doucoure to restore the lead from close range. His second goal since joining Watford from Rennes in 2016.

Roberto Firmino’s penalty made it 2-2 before Mohamed Salah thought he had won it only for Britos to equalise. Joel Matip also hit the bar and Dejan Lovren forced another good save from Gomes as the Reds dominated the closing stages until Watford’s late leveller.

In Jurgen Klopp’s 100th competitive game as Reds boss, Liverpool wasted a string of chances before Uruguay defender Britos headed over the line from close range.

Liverpool’s defensive frailties surfaced again as they could not see the game out. They failed to clear their lines from the delivery and Richardson’s shot came off Mignolet’s outstretched arm and cannoned off the woodwork, with Britos on hand to head the ball over the line and spark wild celebrations in the stands.

Liverpool were nowhere near a 100%, with a gruelling pre-season tour, you could feel they needed another week to bring their fitness levels to the standards Klopp demands. Perhaps a game here on English soil with a tough team would also have improved their match sharpness. But given the lack of domination in midfield today and the scoreline at half time, a point may not be a bad result away from home.

At the time you must give plenty of credit to Watford, who were sharp and good going forward. And deserved at least a draw today.

Struggling to catch our breath after that one! A deserved point.

💬 | Britos: "I think it's my goal as I was on the line! It's always positive when you get something at home against a good team." pic.twitter.com/wolkYNRWTO