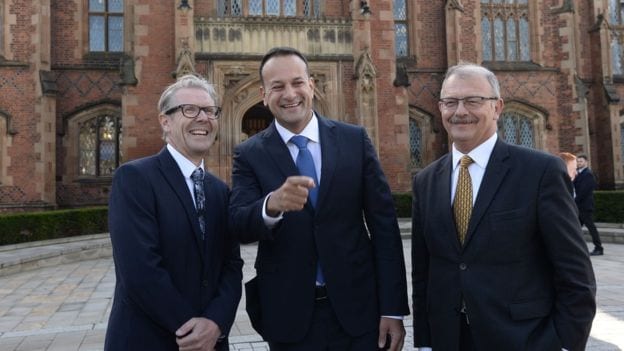 Northern Ireland suffered almost 30 years of violent conflict before it ended two decades ago. Much of that was because the border with the Republic of Ireland was dismantled allowing free movement of people and goods. But the UK’s decision to leave the EU could mean Britain’s only land boundary with an EU country would need new immigration controls. Irish Prime Minister Leo Varadkar has called for “unique solutions” to preserve the relationship between the UK and the European Union after Brexit.

China says India has been building up troops along its side of the border and demands an “immediate withdrawal” amid an increasingly tense stand-off in a remote frontier region high in the Himalayas. The stand-off on a plateau, which lies at the China-India-Bhutan junction, is one of the worst border disputes between the nuclear-armed rivals in more than 30 years. The standoff began in June when Chinese troops began building a road through the plateau. The plateau is currently disputed between China and Bhutan with India supporting Bhutan’s claim over it.

A large fire has ripped through a skyscraper in Dubai in the United Arab Emirates – for the second time in two years. Firefighters have extinguished a blaze that swept through one of the world’s tallest residential buildings in Dubai early on Friday, forcing occupants to flee their homes as burning debris showered down the sides of the 79-storey tower. No major injuries were reported. A few people were treated for smoke inhalation.

The government has published its central piece of Brexit legislation, the Repeal Bill, but Theresa May could face a constitutional crisis as the Scottish and Welsh governments have said they will not give their consent to the legislation. The bill, which would end the supremacy of EU law over British legislation and repeal the bill that brought the UK into the bloc, is intended to “maximise continuity” on the day of the UK’s departure.

Data from the UCAS admissions service has revealed the number of people applying for UK university places has fallen by more than 25,000 – or 4% – on last year.  It is the first decline in applications since tuition fees were increased to £9,000 in 2012.