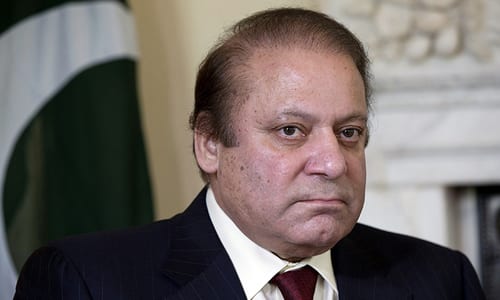 Islamabad, Pakistan– Pakistan’s Prime Minister Nawaz Sharif has stepped down after the Supreme Court disqualified him from office as leader of the country’s government. Nawaz Sharif has again been unable to finish his Term as PM, in each of his past two terms he has been ousted before being able to complete his 5 years.

Supreme Court ruling follows months of hearings over Nawaz Sharif’s alleged corruption revealed in ‘Panama Papers’ leak. A five-member bench of the Supreme Court announced the verdict to a packed courtroom in the Pakistani capital, Islamabad.

The verdict said that the prime minister and his family have failed in the court of public opinion and more importantly, in the Supreme Court, to establish credibility in terms of where the money came from, how it’s been accounted and how well it was reported in the nomination papers submitted to the elections commission.

The failures here are of Nawaz Sharif and his family to establish a credible and coherent case in terms of explaining how their names ended up in the ‘Panama Papers.

The judges ruled that Nawaz had been dishonest to the Parliament and the courts in not disclosing his employment in the Dubai-based Capital FZE company in his 2013 nomination papers, and thus, could not be deemed fit for his office.

Shortly after the order, the PM House issued a notification saying that Nawaz Sharif, despite having “strong reservations” on the SC’s verdict, has stepped down from his post as the premier. Reacting to the court’s order, a PML-N spokesperson said that the party will utilise all legal and constitutional means to contest the verdict.

The judgement announced shortly after 12 pm, brings Sharif’s third term in power to an unceremonious end, roughly one year before the scheduled general elections which would have seen him become the first Pakistani prime minister to complete a full five-year term. It is unclear at the moment who will be appointed to take over the post till the next general elections, which are scheduled for 2018.

Finance Minister Ishaq Dar and Captain Safdar, who is a MNA, who are members of National Assembly, were also declared unfit for office. Friday’s landmark ruling comes after months of hearings in a case instigated by the “Panama Papers” leaks, related to alleged corruption during his previous two terms in office.

Following years of prosperous development deal with China and infrastructure improvements in the country, stability in the region was the key ingredient to maintaining this. Pakistan must now move on and elect a new premier before the next election.

Stability in the region is focul point for to bring foreign investment in the country.  It has now been thrown up in the air again, largely due to the protest of Imran Khan, The Chairman of PTI party, which is seen as a victory for the former cricketer.

The Court is now moving to investigate Imran Khan an other leaders as well who are also being evaluated for the potential leadership.