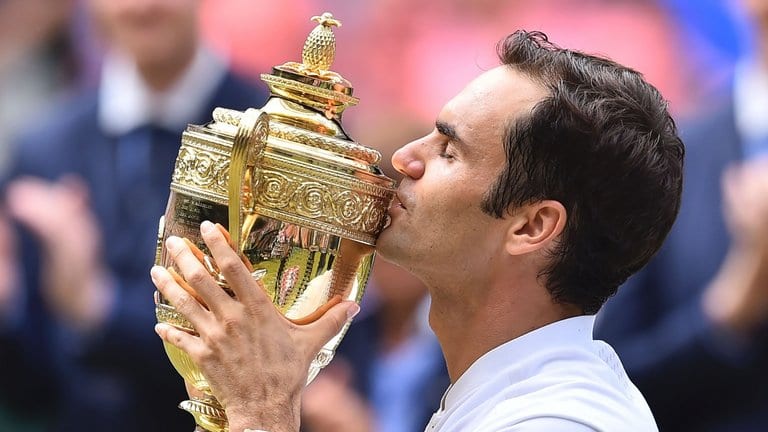 In a league of his own Roger Federer

On a hot British sunny Sunday, normal service resumed. Roger Federer won a record eighth Wimbledon title to become the tournament’s oldest men’s champion in the Open era with a one-sided straight sets victory over Marin Cilic. Isn’t that how it has always been?

Doubt that he could ever be what he was. Doubt that five years without a Wimbledon title, having once held such dominance that he won five in a row, could be an interregnum rather than the end. Doubt that six months off after his semi-final defeat a year ago, by a man a decade younger, wasn’t the thin end of retirement in disguise. Believe Federer 2017 (#RF2017) is a player reborn.

“But I always believed. I kept on believing and dreaming I could get back. Here am I today with the eighth. It’s fantastic if you keep believing you can go far in your life.” Rodger Federer in his own words after winning his eighth Wimbledon title, 19th Career Grand slam.

The decline was long and it was true. After his impregnability was shattered by Rafa Nadal in 2008, two more Wimbledon titles came – but they sandwiched two quarter-finals defeats and were succeeded by second-round humiliation to a man ranked 116 in the world.

He could cast magic in hot bursts, pulling Andy Murray apart in the semi-final two years ago, but the spell would not hold, as a dead-eyed dismantling by Novak Djokovic followed in the final.

At the start of this year, the doubt was everywhere but in his own mind. First came that astonishing Australian Open final against Nadal in January, not a faded version of a better past, but history remade again.

His career had appeared to be over for good last year. He was approaching his 35th birthday. He had not won a Grand Slam since 2012. And, worse still, he was struggling with a knee injury – sustained whilst running a bath for his twin daughters – which forced him out of the game for five months.

Federer moved ahead of Britain’s William Renshaw and American Pete Sampras to claim his eighth title at the All England Club. He also became the first man since Bjorn Borg in 1976 to win the Wimbledon title without dropping a set.

The tennis gods have been kind to Federer at Wimbledon this year. Andy Murray hobbled out with a hip problem. Novak Djokovic was given the elbow by an inflamed joint. And Rafael Nadal was sunk by a 34-year-old Luxemburger, Gilles Müller, who suddenly played the best tennis of his career. But on the evidence of this fortnight, Federer would have been tough to topple whoever was on the other side of the net.

Federer surpasses Pete Sampras and William Renshaw, who won their seventh titles in 2000 and 1889 respectively, with only Martina Navratilova still ahead in terms of Wimbledon singles titles on nine.

He has won two of the three Grand Slam titles so far this year, having returned from a six-month break to win the Australian Open in January.

With 19 major titles, he extends his lead over Rafael Nadal in the men’s game to four and now stands joint-fourth on the all-time list with Helen Wills Moody, five behind Margaret Court on 24.