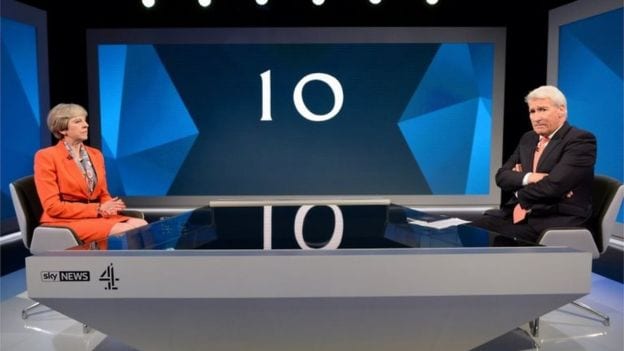 The leaders did not appear together, as Mrs May declined to take part in a head-to-head encounter.

The Prime Minister Theresa May and Labour leader Jeremy Corbyn took diverging tracks over Brexit negotiations Monday as they faced a tough live TV grilling ahead of June’s general election.

While Corbyn insisted he would “make sure there’s a deal” with the European Union before Britain leaves the bloc, May said she was “prepared to walk out”.

“No deal is better than a bad deal,” the 60-year-old prime minister repeatedly said in the Sky News/Channel 4 “Battle for Number 10” broadcast, which quickly started trending on Twitter with many mocking the PM’s catchphrase.

“We have to be prepared to walk out,” the premier insisted, noting that some people in Europe were “talking about punishing us”.

May was laughed at by some members of the audience when interviewer Jeremy Paxman asked whether the EU would see her as a “blowhard who collapses at the first sign of gunfire” after she flip-flopped on her “dementia tax” plans.

Disappointing some Labour supporters, her 68-year-old rival Corbyn said the “reality” of last year’s Brexit referendum result had to be respected. The left winger insisted, “We will make sure there’s a deal”.

“We won’t start the negotiations with megaphone diplomacy, threatening Europe with some kind of offshore tax haven on the shores of Europe,” he said in a dig at May’s efforts to handle Brexit.

Both candidates officially supported staying in the EU before the referendum held last June, which saw 52 percent of British voters opt to leave the bloc.

Formal talks on Britain’s withdrawal are due to start on June 19, just 11 days after the general election. May triggered Article 50, the formal procedure for leaving the EU — in late March, opening a two-year timetable for negotiations before withdrawal.

Ten days before the snap poll on June 8, the two rivals bizarrely separately faced questions from members of the public before interrogations by Jeremy Paxman, famous for his aggressive and robust interview technique. but the leaders did not appear together, as Mrs May declined to take part in a head-to-head encounter.

In the 90-minute programme, the Prime Minister was repeatedly challenged on her policy u-turns – while the Labour leader was grilled on his past support for the IRA.

Both leaders dodged some awkward questions and supporters of both party leaders claimed victory after the Battle For Number 10, but the toughest challenge will be limiting the damage the Mr Paxman did when he told her “What one’s bound to say is that if I was sitting in Brussels and I was looking at you as the person I had to negotiate with, I’d think ‘she’s a blowhard who collapses at the first sign of gunfire’.”

#TheresaMayGifs strong and stable until you ask a question … pic.twitter.com/pmphjoLiQz

Theresa May when she was told she had to speak to the public. #TheresaMayGifs pic.twitter.com/ELdnGfny25