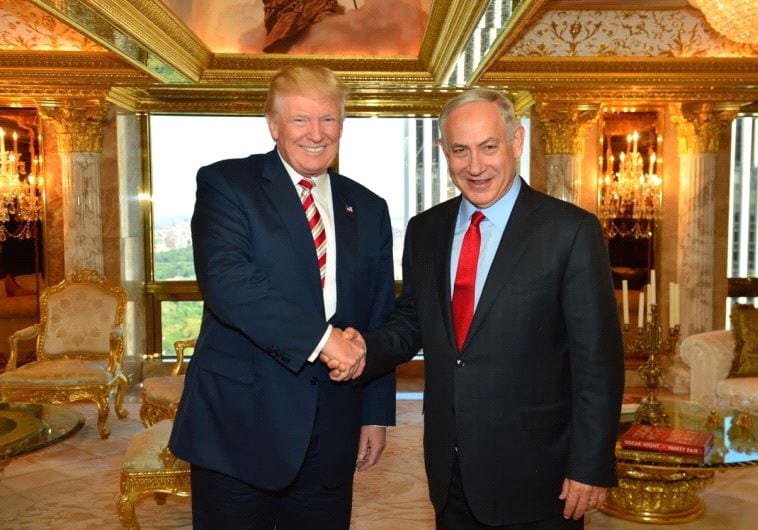 The two leaders, who seemed to strike up an emerging “bromance” in social media exchanges since the election

President Donald Trump on Wednesday dropped the United States led commitment to a two-state solution to the Israeli-Palestinian conflict, a longstanding bedrock of Middle Eastern policy. It is something that the previous administrations have been committed to and have work towards.

In the first face-to-face meeting between the two leaders since Trump’s inauguration, the president backed away from a U.S. embrace of the proposed creation of two states; an Israeli and a Palestinian state, a position taken by successive administrations and the international community.

“I’m looking at two states and one state, and I like the one both parties like,” Trump told a joint news conference with Netanyahu. “I can live with either one.”

Trump vowed to work towards a peace deal between Israel and Palestinians but said it would require compromise on both sides, leaving it up to the parties themselves ultimately to reach the terms of any agreement.

But he offered no new plan for achieving an accord and the Palestinian anger over his abandonment of their goal of statehood could scrap any chance of bringing them back to the negotiating table. Tensions between the nations have been exacerbated especially since Israel’s announcement to increase its settlement projects by 3000 this year.

A nervous or at least conscientious President was almost forced to make the statement as they faced reporters just before sitting down for talks, Trump told him: “I d like to see you pull back on settlements for a little bit.”

The right-wing Israeli leader, who may have expected more decidedly pro-Israel rhetoric as the two sought to get past years of feuding with Trump’s predecessor Barack Obama, appeared startled.

Then Netanyahu deflected the statement by saying Jewish settlements were “not the core of the conflict” and made no commitment to reduce settlement building in the occupied West Bank.

A more self-assured, Trump echoed Netanyahu’s calls for Palestinians to recognise Israel as a Jewish state – something they have refused to do – and to halt incitement against Israelis.

The two leaders, who seemed to strike up an emerging “bromance” in social media exchanges since the election, sought to demonstrate good personal chemistry face-to-face as well, both sporting smiles and exchanging pleasantries.

A good relationship with the US is something the Israelis need, to push and support their advancing agenda, however, power and control are equally important and what is now known as the ‘power handshake’ demonstrates the need for control.

Meetings with Obama were at best cordial and business-like, at worst tense and awkward. In 2011, Obama grimaced as Netanyahu lectured him in front of the cameras on the suffering of the Jewish people through the ages.