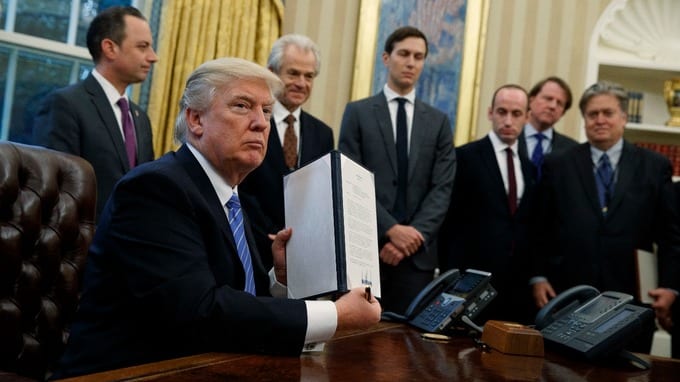 Trump is going to build the Mexican wall

President Donald Trump signed executive orders to begin construction of Mexican wall between the United States and Mexico. A border of 1,933 miles will need to be covered and the wall would be built to cover at least 1000 miles with natural obstacles covering the rest of the distance. He is making good on a campaign promise and also announced he will boost deportation efforts and beef up border patrol resources along the border.

President Trump has indicated that construction of border wall to begin “in months.” And will save lives on both sides of the border. Meanwhile press secretary Sean Spicer repeats and insists ‘Mexico will pay’ for wall as Trump signs additional executive order to cut funding for ‘sanctuary cities’

Donald Trump faced a fresh torrent of criticism on Wednesday as he moved ahead with plans to build a wall on the Mexican border.

Trump orders wall to be built on Mexico border. BBC

Now that Trump is President, I'm not sure the wall is necessary. I'm sure someone will have to explain this tweet to him. #Mexicanwall

Can someone give Trump a copy of Netflix's NARCOS so he can see a wall ain't gonna do anything? #Mexicanwall

Going to call it 'Undermining'#Mexicanwall

Trump is going to build the Mexican wall