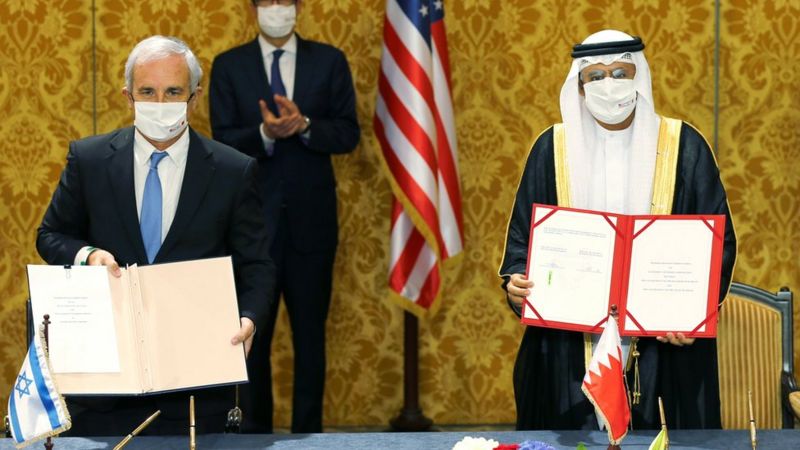 Israel and Bahrain peace deal is confirmed as both parties signed a joint communique to formalise nascent ties at a ceremony in Manama on Sunday as the wealthy Gulf region continues to open up to the Jewish state.

An Israeli delegation, led by National Security Council chief Meir Ben-Shabbat, arrived from Tel Aviv for a one-day trip that saw Israel and Bahrain formalise a US-brokered agreement they signed at the White House on September 15.

For decades, most Arab states have boycotted Israel, insisting they would only establish ties after the Palestinian dispute was settled. The UAE and Bahrain – both allies of Saudi Arabia – have shared with Israel worries over Iran, leading to unofficial contacts in the past. That aligned with Trump pressure has pushed this deal through, despite condemnation from the Muslim world.

The United Arab Emirates and Bahrain became only the third and fourth Arab states, respectively to agree to normalise ties with Israel. The first two Arab states to agree a deal with Israel were Eygpt and Jordan, which followed Israel’s 1979 peace deal with Egypt and a 1994 pact with Jordan.

Some analysts have suggested this deal has been forced through with a flurry of diplomacy between some of Washington and Israel, and Bahrain in order to hand US President Donald Trump a key foreign policy win as he campaigns for re-election ahead of polls in November.

The majority of the legwork was done by Jarred Kushner, Ivanka Trump’s husband and President Trumps son in law earlier this year.

Israeli media report that the document did not include any references to the Israeli-Palestinian conflict.

Following the signing, Bahraini Foreign Minister Abdullatif bin Rashid Al-Zayani said in a speech that he hoped for “fruitful bilateral co-operation in every field” between the two nations.

He also called for peace in the region, including a two-state solution to the Palestinian conflict.

My Tweets
We use cookies to help identify your computer so we can tailor your user experience, track shopping basket contents and remember where you are in the order process. WTX News Our Cookie Policy
Suspects behind beheading called for teacher Sam’s death
Daily News Briefing: UK to start rapid Covid-19 tests at Heathrow on Tuesday
To Top
Weekly