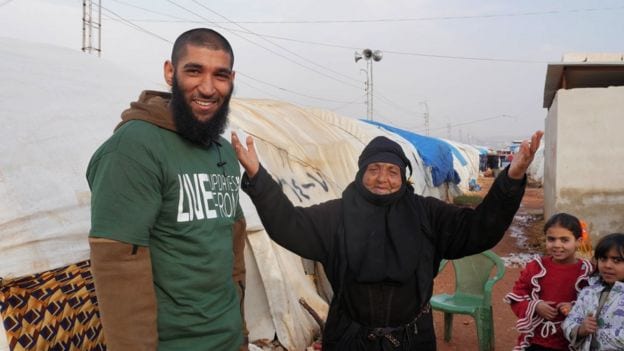 Ridley, from Scotland, is understood to be in direct dialogue with the Islamists, in an attempt to break the deadlock between HTS and Sharif’s family, friends and supporters.

The British aid worker was arrested on June 29 by around 15 HTS men heavily armed and wearing masks. Eyewitnesses have confirmed reports he was struck several times on the head with the butt of a weapon and taken away cut and bleeding from his family home near the Atmeh refugee camp close to the Turkish border.

Sharif, 31, from Walthamstow, lives and works in the northwestern Syrian city, with around 200 other British humanitarian workers.

Sharif is hugely popular in Idlib among locals and refugees after raising hundreds of thousands of pounds in aid through the social networks, television fundraisers and other crowdfunding appeals for charity.

Campaigns for his release have been launched in both Idlib, predominantly among the widows and orphans who rely on his charity for aid, and back in the UK where he is known affectionately as Tox by his friends.

Ridley, who says his UK citizenship was revoked and his eldest daughter refused a passport back in May 2017, said: “Under normal circumstances, the UK Foreign Office would be involved in negotiations for his release, but he has been disowned by the British Government on the most spurious grounds.

Reaching out to the Syrian Rebels

“I have asked HTS to agree to a welfare visit from myself. Someone has to represent Sharif and stand up for his human rights. if the British Government won’t do it then I will,” said Ridley who has also worked on hostage negotiations and overseas prisoners’ rights and welfare.

She is highly critical of the Home Office’s decision to revoke citizenships for some workers engaged in humanitarian projects in war and conflict zones, especially cases which rely heavily upon the use of secret evidence in secret legal proceedings.

After it emerged his citizenship had been revoked, Sharif accused the British Government of “making it a crime to care” and was also highly critical of the secret court system.

Ridley says delivering aid in Syria is fraught with difficulties but those humanitarian workers operating on the ground locally are usually allowed by the controlling HTS group to move about freely.

“I visited Idlib last year and although the journey was precarious I am prepared to do it again. I don’t want to play the blame game, I just want to make sure his human rights and welfare are being correctly observed,” she added.

In the video, Ridley reminds HTS that she was once a prisoner of the then ruling Taliban in Afghanistan and was treated with courtesy and respect before she was released on humanitarian grounds. Two years later she embraced Islam.

“I’m hoping that my personal experience will resonate which is why I’ve referenced it in the video. It has helped me secure the release of other hostages previously,” she said.

Sharif and his British wife Racquell Hayden-Best have been in Syria since 2012 when he acted as the logistics leader for the first aid convoys from Britain to the war-torn country, using ambulances to take in food and medical supplies. He stayed behind to set up makeshift schools and launch his own aid organisation.

He is now a well-known figure among British charities operating in Syria and is hugely popular on the ground with local Syrian people.

There are concerns the group has become lawless and authoritarian as Idlib slides into further chaos coming under attack from Assad forces, the Russian military as well as Iranian-backed militias.

Idlib is regarded as the last major stronghold for anti-Assad government rebels and jihadist groups in Syria. While pro-Assad government troops and allied Russian and Iranian forces have captured parts of Idlib, rebels and Islamist fighters still control strategic parts of the border province. HTS is the main Islamist group that operates in Idlib.