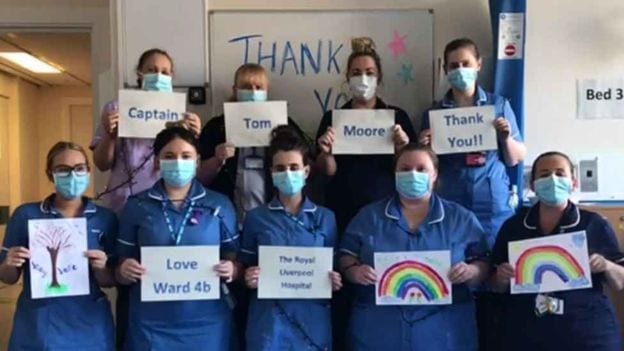 The UK Foreign Secretary Dominic Raab Lockdown in the UK has been extended for a further three weeks.  The NHS is struggling to cope, new makeshift hospitals are being made and the countries economy is on the verge of collapsing. But the British community spirit is getting stronger.

It was always inevitable that the UK will struggle for health care facilities and delivering food and essentials to the most vulnerable. When this pandemic it reaches the peak of the coronavirus outbreak, it may even collapse, so communities in London and the Northwest have taken it upon themselves to help the situation.

In London, AMAFHH Group ( which is made up of Volunteers) has taken the initiative of distributing food daily in London’s Brent area with help from the local community.

The volunteers come together daily to organise the food packaging and then distribute food packages in local neighbourhoods whilst observing social distancing measures as advised by the British government guidelines.

Council Leader Mohammed Butt said that with almost 1,000 confirmed cases of COVID-19 in Brent alone – making it the hardest-hit area in London – it is crucial that individuals and businesses continue to help the most vulnerable people in the local area.

Mohammad Butt said that the need for help is wide-scale but he has worked with others to reach out to the nearest areas as a showcase for other areas. He said the volunteers have received an overwhelming response which highlights the shortages being suffered by London’s most vulnerable.

The Iraqi Welfare Association with help from local Pakistani community members and sponsors of this food drive campaign, AMAFHH Investments, provides food to those parts of the borough which are considered most deprived. The volunteers said that they had received hundreds of requests from residents for much-needed food essentials.

AMAFHH Chairman, Mohammed Abdul Rasoul Jawad said: “Help and solidarity amongst us is a cornerstone in our belief, irrespective of our faith, race, or sect. We will continuously offer our support to all those in need and in particular the elderly and vulnerable. As Imam Ali Ibn Abi Talib, says, “People are of two kinds, either you’re brothers in faith or you are equal in humanity.”

Mohammad Jawad said that a hotline number has been advertised widely in the local area requesting anyone in need to contact the number and register their needs. He said that action is taken instantly once an appeal is made.

The amazing WW2 veteran, Capt Tom Moore at the age of 99, has walked his 100th lap after raising £15m for the NHS.

He originally wanted to raise £1,000 for NHS Charities Together by completing laps of his garden before his 100th birthday. But he has smashed his target after more than 700,000 people made donations to his fundraising page. The 99-year-old war veteran has walked 100 laps of his garden to raise £15m and counting for the NHS.

With the aid of a walking frame, he completed 100 laps of the 25-metre (82ft) loop in his garden in Marston Moretaine, Bedfordshire, in 10-lap chunks well before his birthday on 30 April.

As he finished the challenge earlier, he said: “I feel fine, I hope you’re all feeling fine too.”

Moving to the north of England, a mosque in Bolton will open its doors to end-of-life patients at the end of April, in a monumental community initiative that aims to free up hospital beds amid the coronavirus outbreak.

📿 Do you want to be part of the 'National Effort' against #COVID-19 and use your mosque as a Nightingale facility?

Masjid E Ghosia in Bolton is temporarily closed to worshippers. But it has a huge hall and 12 rooms, which are normally used for community functions and children’s Islamic classes. These will now be transformed into Nightingale hospital to provide end-of-life care to 23 people who need it, under the guidance of Dr. Mohammed Jiva MBE, 50, who came up with the initiative and is leading it.

He is being supported by a group of Muslim doctors and the Bolton National Health Service (NHS) Foundation Trust.

The idea was enthusiastically agreed to by the mosque committee, which had invited Jiva to advise them on putting in place restrictions to prevent the spread of COVID-19 before the lockdown was announced.

“They wanted the community to see that when it really comes down to a crisis, the mosque, its committee and its facilities are there at the community’s disposal to help it out.”
Jiva said based on experiences of countries such as Italy, Spain and France, the UK will struggle for health care facilities when it reaches the peak of the coronavirus outbreak.

“Difficult decisions are being made across the country about who out of a group of people will be given a ventilation bed based on the probability of their recovery. It’s a difficult decision and an ethical one that hospitals will have to make,” he said.