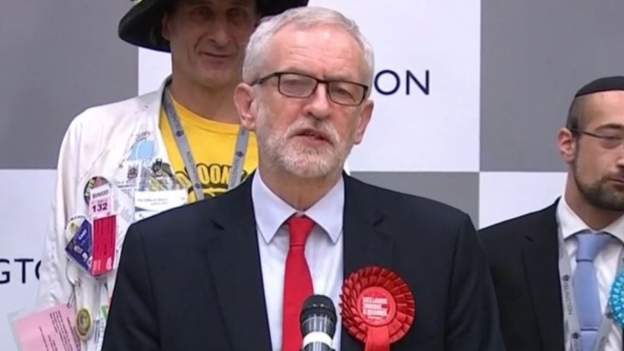 Breaking News: Jeremy Corbyn to step down as Labour leader, despite being re-elected as the member of Islington North by an overwhelming majority.

The Labour leader has held onto his own seat of Islington North with a big 26,000 majority.

As he reflects on the night in his speech the Labour leader Jeremy Corbyn offers “very heartfelt thanks” to his constituents of whom he says it is his “pride and pleasure” to represent.

He will stay on as leader of the labour party as it reflects and analyses the election results and elects a new leader.

The BBC in its live night of coverage of the election are seeking his immediate resignation. In Jeremy Corbyn’s speech, from Islington, he cited the bias of the media towards him, who have continually, been pushing the antisemitism agenda against him.

He also went onto thank his family and close friends and his wife “for all she puts up with because of the way the media behaves”.

Turning to the election result he says: “Obviously it is a very disappointing night for the party.

“But I want to say this – in the election campaign we put forward a manifesto of hope.