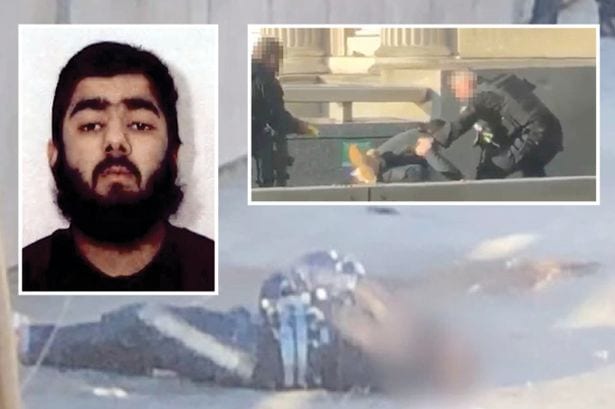 Two women and one man were injured and remain in hospital.

The Met has identified the London Bridge attacker as Usman Khan, a 28-year-old man released from prison on a licence (parole) in December 2018 after spending eight years in jail for terrorism offences.

Two people were killed in a stabbing rampage on London Bridge with the suspect shot dead by police after he was disarmed by bystanders.

British police named the man as 28-year-old Usman Khan, who had been previously convicted of terrorism offences and released from prison last year.

The suspect had been living in the Staffordshire region of central England and officers were searching an address in that area.

Usman Khan was wearing an electronic tag and had reportedly been invited to attend a justice conference on prison rehabilitation at Fishmongers’ Hall, on the northern side of London Bridge, on Friday. The attack began there.

Two people, one man and one woman, died after being stabbed in an attack and was killed at London bridge

“The circumstances, as we currently understand them, are that the attacker attended an event earlier on Friday afternoon at Fishmonger’s Hall called ‘Learning Together’,” the statement said read by Assistant Commissioner for Specialist Operations Neil Basu.

“We believe that the attack began inside before he left the building and proceeded onto London Bridge, where he was detained and subsequently confronted and shot by armed officers.”

Shot whilst restrained and unarmed

The attacker Usman Khan was shot dead by police after being restrained by hero bystanders, including one man wielding a fire extinguisher and another wielding a five-foot-long narwhal horn he had apparently taken from the walls of Fishmongers’ Hall.

Despite being restrained and on the ground, the Met Police used deadly force to terminate him. An enquiry into the killing is due to take place later this afternoon.

One man and one woman died after being stabbed. Their names have not been formally released. Two women and one man remain in hospital although they are expected to recover.

Those who saw the incident have talked about the panic they felt as gunshots rang out and a suspected attacker died after being shot by armed officers. Luke Poulton,  a bystander said ‘he heard four gunshots,’ which we now know where all fired by the Met Police Officers.

One man, wearing a grey suit, was seen running along London Bridge holding a knife he had grappled away from the suspected attacker on Friday and heard the shots as he ran away.

The mayor of London, Sadiq Khan, has praised members of the police and the public who confronted the alleged London Bridge attacker.

Khan said footage shared on social media of the people trying to bring the suspect down shows their “heroism”.

“What’s remarkable about the images we’ve seen is the breathtaking heroism of members of the public who literally ran towards danger, not knowing what confronted them,” he said.

“It’s another example of the bravery and heroism of ordinary Londoners running towards danger, risking their own personal safety to try and save others,” he said.

Khan also thanked the emergency services for putting their lives on the line for the city.

Usman Khan, a 28-year-old man who was jailed for terrorism offences in 2012 after pleading guilty to involvement in the 2010 Stock Exchange Plot. which was disrupted by MI5 and the police.

He is also understood to have been a supporter of al-Muhijaroun, the extremist group which scores of terrorists were involved with, according to the anti-extremism group Hope Not Hate.