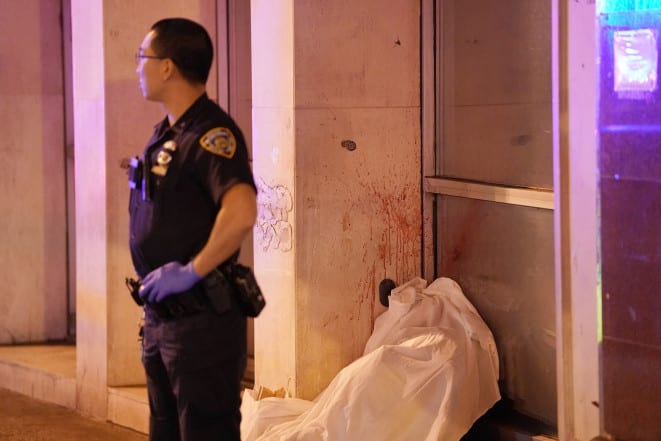 Four men who are believed to be homeless were brutally attacked and killed Saturday in a New York City street rampage.

The killer first struck just before 2 a.m. on Saturday on a quiet spot on East Broadway in Chinatown, sneaking up on three homeless men as they slept on a sidewalk and bludgeoning them to death with a rusty, three-foot metal bar

Police investigate the scene where homeless men were found dead in Chinatown. Following a murder rampage that left 4 dead appear to be ‘random attacks’

Police responded to a 911 call just before 2 a.m. as one assault was in progress in Manhattan’s Chinatown neighbourhood.

A 24-year-old suspect is in custody but has yet to be charged, the detective said. The suspect has been identified as Rudy Rodriguez Santos, and is expected to be charged on Saturday afternoon with murder.

The victims apparently were asleep when they were attacked in three different locations. The first died of blunt trauma to the head. A second man was attacked nearby but survived. He was taken to New York Downtown Hospital in critical condition.

Police searching the area then discovered three other male victims around the corner on East Broadway. They also died of trauma to the head.

The three men — who had been sleeping at the time of the attacks — were pronounced dead on the scene, police said.

An official police investigation is taking place to determine the motives of the rampaging killer. Some have unidentified police officers have suggested he was high and ‘not all there’.