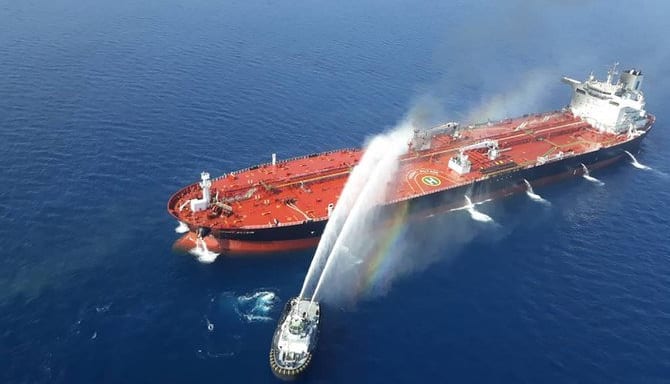 Iran has denied any involvement on the issue

Two oil tankers were hit in suspected attacks in the Gulf of Oman, shipping firms and industry sources said Thursday, sending oil prices as much as four percent higher a month after four other tankers were damaged by limpet mines in the region.

One of the tankers, the Front Altair, carrying a cargo of petrochemical feed-stock, was ablaze in waters between Gulf Arab states and Iran.

Iran’s state news agency said it had sunk, although the Norwegian owner had said it was afloat and its crew were safe. The other tanker was adrift without any crew.

The Bahrain-based US Navy Fifth Fleet said it was assisting the tankers after receiving distress calls. The UK Maritime Trade Operations, a part of Britain’s Royal Navy, said it was investigating with its partners.

Saudi Arabia said it agrees with the US blaming Iran for attacks on two tankers in the Gulf of Oman as the Americans produced a video on Thursday showing the removal of mine from the side of one of the ships by the Iranian Revolutionary Guard Corp.

In a statement released on Friday, the Iranian mission to the United Nations added that it “condemns it in the strongest possible terms”.

An Arab political commentator from the Middle East said: “if the US were close enough to record a video, they should have acted sooner to prevent the attack.”

The attacks on the ships are part of a “campaign” of “escalating tension” by Iran and a threat to international peace and security, US Secretary of State Mike Pompeo said.

“It is the assessment of the United States government that the Islamic Republic of Iran is responsible for the attacks that occurred in the Gulf of Oman today,”

Iran has denied any involvement on the issue and has accused Saudi and the USA of making false accusations to pursue their road to war with Iran.

Full details about Thursday’s incident were not immediately clear. Yet the US has immediately said Iran is responsible, citing the Iranians have the capability to lead such attack. However, analysts suggested that US warships and other western ships were in the area.

The firm that chartered one of the vessels said it suspected a torpedo had hit the ship, while a source said the other might have been damaged by a magnetic mine.

An investigation blamed limpet mines for last month’s attacks on four tankers. Saudi Arabia and the US blamed Iran for those attacks, another charge Tehran denies.

Oil prices surged as much as four percent after Thursday’s news.

In 2018, the US pulled out of the landmark nuclear deal reached in 2015 that was aimed at curbing Iran’s nuclear activities.

The move was strongly criticised by a number of countries, including America’s closest allies. Additionally, President Donald Trump tightened US sanctions on Iran – mainly targeting its oil sector.