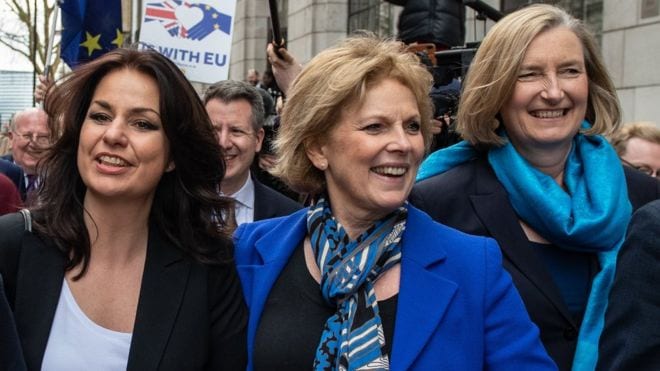 Three Tory MPs have resigned from the party to join an independent group, set up by former Labour MPs, who quit earlier this week.

Anna Soubry, Sarah Wollaston and Heidi Allen wrote a joint letter to Theresa May to confirm their departure.

“You don’t leave a political party that you’ve called ‘home’ for many years, without a great deal of thought and a considerable amount of heartache”. Said Independent MP Anna Soubry.

The PM said she was “saddened”, but her party would “always offer… decent, moderate and patriotic politics”.

Speaking at a news conference, Heidi Allen jokes: “You’ve met the magnificent seven, you heard last night about the lone ranger, so I guess that makes us the three amigos?”

The three criticised the government’s “disastrous handling” of Brexit and said it had undone “all the efforts to modernise” the Conservatives.

The pro-Remain trio will join the new Independent Group – made up of eight Labour MPs who resigned from their party over its handling of Brexit and anti-Semitism – saying it represented “the centre-ground of British politics”.

Heidi Allen said that after quitting the Tories, she says she feels “so excited in a way that I haven’t felt since I was first elected” and has a “sense of liberation”.

The departure of the three MPs has reduced the government’s working majority to nine MPs, and Ms Allen claimed there were “absolutely” other colleagues “keen” to join the group.

The Independent Group now has more MPs in Parliament than the Democratic Unionist Party and equals the number of Liberal Democrats.

It is with a heavy heart I have today resigned from the Conservative Party. pic.twitter.com/wzPUB84w5Z

The three MPs said they will support the government on areas such as the economy, security and improvements to public services, but they felt “honour bound to put our constituents’ and country’s interests first” over Brexit.

They told Mrs May in their letter: “We voted for you as the leader because we believed you were committed to a moderate, open-hearted Conservative Party.

“Sadly, the Conservative Party has increasingly abandoned these principles and values with a shift to the right of British politics.”