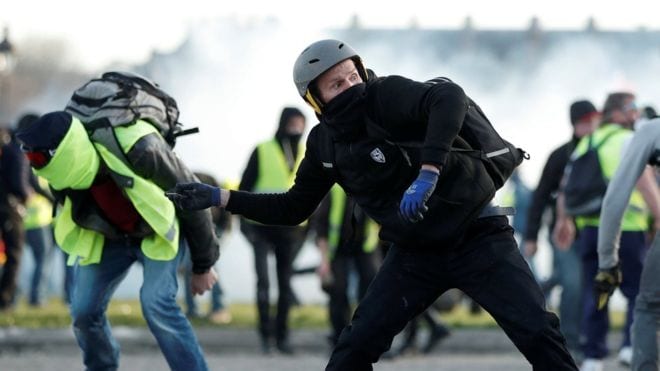 French police fired tear gas to disperse protesters who threw projectiles and set bins on fire in Paris, Lyon and Bordeaux on Saturday, as the 14th straight weekend of “yellow vest” protests took a violent turn in the afternoon.

Demonstrators gathered peacefully earlier in the day at the Arc de Triomphe in Paris, a flashpoint of clashes with the police in the early days of the protests, before marching toward the Eiffel Tower.

In Rouen in the north, four people were injured after a driver tried to force his way through a crowd of protesters, authorities said.

Later in the afternoon, police and hooded protesters clashed at the Esplanade des Invalides in central Paris where the march was expected to end, forcing some into adjoining streets where some skirmishes were reported.

In Bordeaux and Lyon, police also fired tear gas and charged, to disperse projectile-throwing demonstrators after bins were set on fire and properties destroyed.

Police used tear gas to control crowds as the so-called “yellow vest” (gilets jaunes) demonstrators took to the streets for the 14th consecutive weekend across the country.

Police stepped in to protect the philosopher Alain Finkielkraut after he was bombarded with insults and anti-Jewish taunts in the French capital.

The number of protesters has fallen from highs of over 300,000 nationwide in November to over 51,000 last week, according to government estimates.

French interior ministry said around 41,500 protesters took part in demonstrations across the country, compared with 51,400 including 4,000 in the capital, compared with 5,000 in Paris last week.

My Tweets
We use cookies to help identify your computer so we can tailor your user experience, track shopping basket contents and remember where you are in the order process. WTX News Our Cookie Policy
Consider me Pakistan’s ambassador to Saudi Arabia – Says Crown Prince
Italy on the brink of leaving the EU
To Top
Weekly