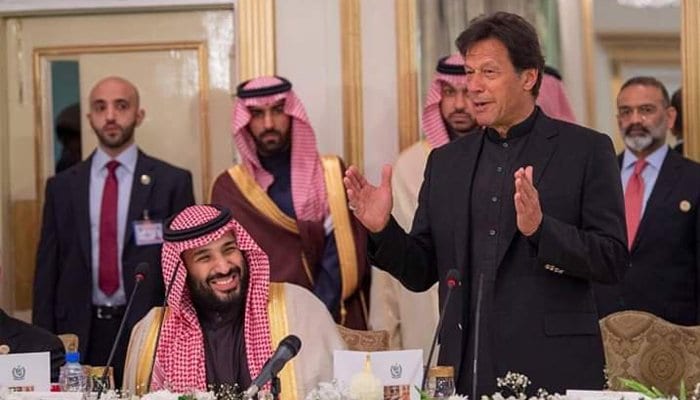 Hundreds of five-star rooms in Islamabad are believed have been booked out for the 1,000-strong delegation.

Pakistan Prime Minister Imran Khan said Saudi Arabia’s Crown Prince Mohammad bin Salman won the hearts of Pakistanis when he said that he should be considered the country’s ambassador to Saudi Arabia.

Pakistan’s ambassador Imran Khan used his official Twitter account and wrote, “Crown Prince Mohammad bin Salman won the hearts of the people of Pakistan when he said ‘consider me Pakistan’s ambassador to Saudi Arabia’ in response to my asking him to treat the 2.5 million Pakistani’s working in KSA as his own.”

It comes as part of a high-profile Asian tour by the kingdom’s Crown Prince Mohammed bin Salman.

Pakistan urgently needs to address a balance of payments crisis and is looking to international backers for support.

Money is one dimension of a relationship that goes much deeper. The two countries have a plethora of interests, especially to the new seaport in Gwadar.

Pakistan was meant to be the first stop on an Asian tour taking in five countries but the crown prince’s trips to Indonesia and Malaysia have been postponed. He is still scheduled to visit China and India in what is being seen as a charm offensive by the controversial prince.

Pakistan’s higher civilian honour will be conferred on the prince, who Mr Khan has praised for his “reformist ideas”.

The Saudi crown prince was greeted in the air by Pakistan JF-17 Thunder fighter jets and then escorted to Islamabad on Sunday on a two-day visit. He was greeted by PM Imran and General Bajwa and given a red-carpet welcome with a 21-gun salute.