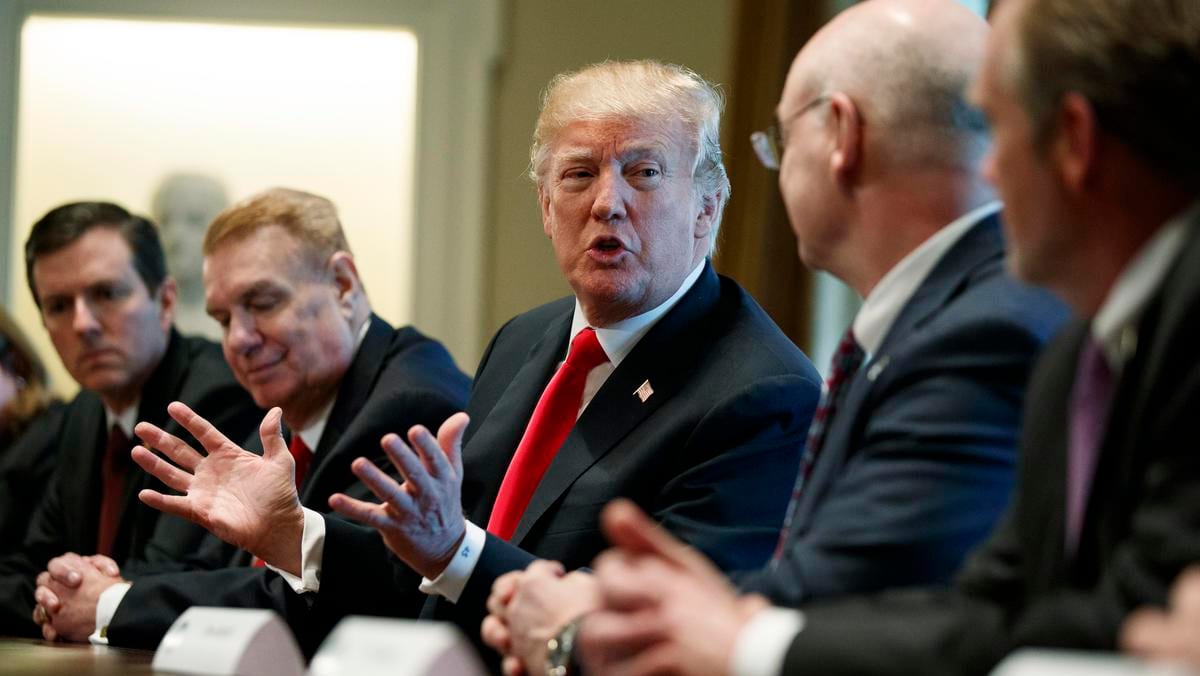 Most of the lunacy that comes out of The White House these days raises a few eyebrows and nothing more since it rarely impacts on the rest of the world … until now.

The Chinese dragon is spitting fire and brimstone, Brussels is upset and even the British poodle is threatening to morph into a Bull Dog, putting the bite to the US President Donald Trump urging him not to start a global trade war.

The US President has threatened to “simply apply a tax” on cars made in Europe if Brussels retaliates against his proposed price hike in foreign steel and aluminium import tariffs. And China, which exports a lot of cheap steel to the US, has warned that it will not sit back and do nothing if the Chinese economy is hit. Canada is none too happy and neither is Brazil, Japan or Mexico.

In his usual rambunctious fashion Trump reckons “trade wars are good” even though the International Monetary Fund (IMF) and the World Trade Organisation (WTO) who deal with the global rules of trade between nations have criticised his moves in the strongest of terms.

Trump says he was spurred in to action by the $800 billion dollar annual trade deficit and so he declared steel imports would face a 25 per cent tariff and aluminium 10 per cent.

Having poked a stick in the hornet’s nest he then went back for more on Saturday when he threatened Europe’s car industry.

Now EU chiefs have, according to some insiders, thought about increasing their own tariffs by 25 per cent on US imports so if you’re a fan of Levi jeans or Harley-Davidson motorbikes or anything else American, it might be prudent to buy now or pay a much higher price later.

So where will it all end? The answer is no one really knows but a number of Republicans are nervously questioning Trump’s wisdom. They know if a man in Belgium or Germany is paying 25 per cent more for his US-made jeans then their own John or Jane Doe will also be hit in the pocket while purchasing anything made in Europe.

Trump reminds me of the child who yanks a lose piece of thread to see where it will all end – hopefully for the rest of the world the unraveling of his administration making Trump a one term president.

Goal machine Salah is proving a great advert for Islam

The BBC is so stuffy at times and tends to look at events from the wrong end of the telescope! I was reminded of this when I saw a headline about the Liverpool footballing legend that is Mohamed Salah on their website asking if the striker’s success was improving engagement with Muslim soccer fans. Absolutely not! However what his performances are doing is proving engagement from non Muslims towards Islam.

Of course the BBC had just caught up with the video WTX News showed recently which had gone viral showing Liverpool fans singing a witty ditty in praise of Salah and his faith after a rash of goals from the super striker. But it’s not just Salah out there flying the flag for Islam … there’s Mesut Ozil, Mousa Dembele, Riyad Mahrez and Paul Pogba to name but a few. And one of the success stories coming out of Newcastle United (and let’s face it, there’s not many these days) was the bevvy of Muslim players the club signed a few years back which prompted the Tyneside firm to instal a prayer room in St James’ Park.

Sport is a great unifier and at the end of the day fans couldn’t give a stuff about the skin colour, culture or faith of their players as long as they can entertain and score goals. Wouldn’t it be great if everyone in life was treated like that?

As avid followers of WTX News already know, I’m heading off for the Syrian Border this week with a bunch of remarkable women from more than 55 different countries on what has become known as the Conscience Convoy. I will be giving regular updates on our progress and no doubt filling you in on my travelling companions.

While the appalling plight of the residents fleeing the rebel-held Eastern Ghouta enclave in Syria worsens Syria’s brutal military backed up by Russian and Iranian forces has advanced on several fronts as they try to retake the besieged enclave just to the east of the capital, Damascus.

Convoy of Conscience – The fight of our lives!

In the meantime the Conscience Convoy hopes to shine another light on another dark corner of the Assad regime and that involves thousands of women who are being held captive in the many prisons and dungeons around Syria. Harrowing tales of brutalisation, rape and torture are emerging and the purpose of the convoy is to try and persuade the regime to release those poor women and their children.

Obviously not everyone has the time to join us on the convoy but if you can’t please post messages on WTX News and other social networks to show your support. This is a woman-only venture but we need everyone’s help regardless of gender so please join in and cheer us on from the sidelines.

So sad to hear of the passing of Sir Roger Bannister, aged 88. He was the first person to run a mile in under four minutes, shaving less than a second off the milestone mark while setting a record at 59.4 seconds in Iffley Road sports ground in Oxford on May 6 back in 1954. That record lasted a mere 46 days but his place in the athletics history books was assured.

After inspiring countless aspiring athletes by breaking the record and then winning gold in the ’54 Commonwealth Games he went on to become a leading neurologist. Sadly he was diagnosed with Parkinson’s disease in 2011.

Scotland’s First Minister Nicola Sturgeon was asked what she thought about the idea of a statue of Margaret Thatcher being erected in Scotland when she appeared on ITV’s political show Peston on Sunday. She had a two-word response: “Steady on!”

I think many of us would have given a two word response but certainly not appropriate for day time television. The crackpot idea came from the Lib Yem MP Jo Swinson over the weekend. Looking at the wastelands of what were once Scotland’s mining communities, shipyards and steelworks I think a memorial would be more fitting!