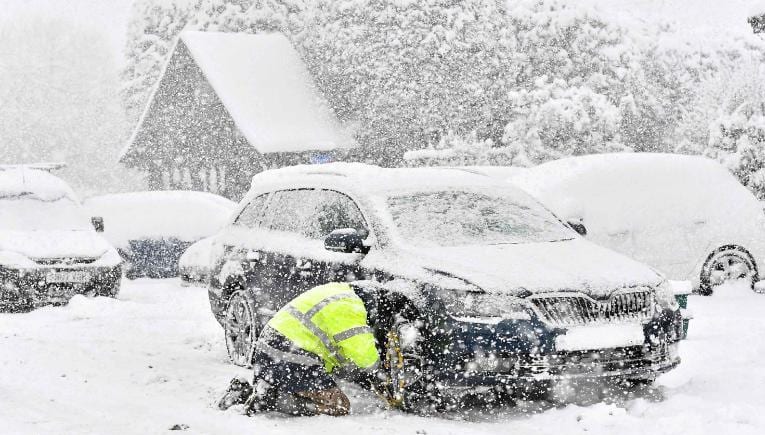 ‘The Beast from the East’ the Siberian storm Emma, is battering the UK. And worse is still to come. Brace yourself

The UK could be headed for its coldest night this year as arctic air brings sub-zero temperatures overnight.

Further heavy snow is predicted to fall on Friday and the Met Office issued an amber warning in anticipation of the east Midlands, North West and Yorkshire receiving a covering of snow.

The Met Office warning predicts accumulations of up to 10cm (4ins) are likely and up to 15cm (6ins) could fall over higher ground.

This is the third day of disruption caused by heavy snowfall.

“Travel delays on roads are likely, stranding some vehicles and passengers. Some delays and cancellations to rail and air travel are likely,” the Met Office warned.

“There is a possibility that some rural communities could become temporarily cut off. Power cuts may also occur.”

A cold front is expected to rush in, bringing rain, sleet and snow, before easing off on Sunday morning.

However, although the snow and sleet is not expected to disappear and the roads are set to remain icy, and motorists have been warned to beware of treacherous driving conditions.

Britain’s national weather service ‘The Met Office’ has issued its highest level of alert which means extreme weather is expected in areas covering central Scotland, Tayside and Fife between 3pm on Wednesday and 10am on Thursday.

A red warning stipulates that “risk to life is likely” and urges people to avoid dangerous regions and closely listen to advice issued by emergency services.

British cars aren’t typically set up for this kind of cold weather. Usually the tires and tread are reasonably capable of managing freezing conditions but beyond the -3 degree they will struggle.

Storm Emma is expected to bring more blizzards, biting winds and significant travel disruption to southern, western and central England, parts of Wales and Northern Ireland.
This is the third day of disruption caused by heavy snowfall.

With temperatures dropping to as low as -12 degrees, the icy roads are creating an almost impossible conditions to drive in regular 2 wheel drive cars. Among the worst are Mercedes and BMW’s with many drivers complaining of being stranded as the cars can’t cope with the conditions.

Winter tyres are designed to handle lower temperatures as they don’t stiffen up as much in the cold, thus providing more grip for drivers.

Forecasters said roads in the south west are likely to become blocked by deep snow, stranding vehicles and passengers.

With the Red Weather Warning in place by the Met office, it is advised for people to stay indoors and avoid any unnecessary journeys.

Related Items:featured, Snow, Storm Emma, The Beast from the East