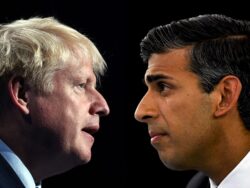 Boris Johnson has abandoned his bid to return to No.10, with his former chancellor Rishi Sunak now expected to become PM (Picture: Getty Images)

Rishi Sunak is on the brink of becoming Britain’s next prime minister today after Boris Johnson sensationally quit in his bid to return to No.10.

Former PM Mr Johnson claimed he had passed the ‘very high hurdle’ of 100 nominations to enter a vote of Tory MPs with 102 ‘including a proposer and seconder’. But he said he had decided ‘this would simply not be the right thing to do’ as ‘you can’t govern effectively unless you have a united party in parliament’.

Mr Sunak had around 150 public nominations last night with rival Penny Mordaunt on just 25. Unless Ms Mordaunt finds another 75 within hours, a vote by party members will not go ahead and Mr Sunak will be declared winner at 2pm today. Mr Johnson – forced out just six weeks ago under investigation after three years

Strewn with scandal – insisted he was ‘well placed’ to deliver victory over resurgent Labour in a 2024 election.

‘There is a very good chance I would be successful in the election with Conservative party members – and that I could indeed be back in Downing Street on Friday,’ he said after withdrawing at 9pm.

‘But, in the course of the last days, I have sadly come to the conclusion that this would simply not be the right thing to do. You can’t govern effectively unless you have a united party in parliament.’

Mr Sunak was runner-up to Liz Truss in the Tories’ summer leadership contest after Mr Johnson’s exit. He was most MPs’ choice but lost in the poll of party members. In live TV debates with rival Liz Truss, he warned her low tax/high growth plan would trigger ‘mortgage misery for millions’.

That appeared to come true as Ms Truss’s disastrous mini-budget spooked the markets, as the pound plunged and mortgage rates rose.

His resignation as chancellor in July sparked a ministerial mass exodus and led to Mr Johnson going. Yesterday, allies said he rejected an offer from Mr Johnson to be chancellor again during three hours of late-night talks on Saturday.

Unless they agree to ‘crown’ a sole leadership candidate today, Tory MPs are due to vote between those who have managed to gather 100 nominations by 2pm. A ballot will run from 3.30pm to 5.30pm, with the result announced at 6pm. The Conservative party calls this an ‘indicative’ poll – and afterwards, its membership will get to vote. The online ballot is due to close on Friday at 11am, and the next prime minister to be named later that day.

Last night, a source close to Mr Sunak told the BBC: ‘We’re not taking anything for granted. Rishi will be continuing to talk to colleagues tomorrow morning before nomination papers go in, and  discussing how best to unite the party and take the country forward.’

As he formally announced he was running earlier, Mr Sunak made a dig at  his former boss, promising ‘integrity, professionalism and accountability’, and saying he would ‘fix our economy, unite our party and deliver for our country’ at a time of ‘profound economic crisis’.

Only 60 MPs publicly backed Mr Johnson as even former allies turned against him. Fellow Brexiteer Steve Baker told Sky News’s Sophy Ridge On Sunday: ‘Boris would be a guaranteed disaster. There’s going to be a vote before the House of Commons on whether he deliberately misled the house.

‘In that vote, it’s guaranteed there’ll be a large number of Conservatives who will refuse, as they see it, to lay down their integrity to save him and at that moment his premiership will collapse.

‘I’m not willing to lay down my integrity for Boris Johnson.’ If parliament’s privileges committee finds Mr Johnson lied to MPs over parties in lockdown he may be suspended, potentially triggering a by-election.

Mr Sunak was backed yesterday by home secretary Grant Shapps, who said he offered ‘stability and proven economic competence in these challenging times’.

Commons leader Penny Mordaunt –third in summer’s leadership battle and first to stand this time – has only 25 named backers, including former deputy prime minister Damian Green. Her allies said she also rejected Mr Johnson’s request to stand aside and join his campaign.

Her only hope of victory last night appeared to be that Mr Johnson’s supporters such as Nadine Dorries would vote for her to scupper Mr Sunak and trigger the members’ vote. Ms Mordaunt insisted she was ‘in this to win it’.

And then there were two: the contenders

Credentials for the job: Former chancellor.

What he’s said: ‘I have the track record of delivery, a clear plan to fix the biggest problems we face.’

Pros: Popular among fellow MPs and rates higher than his Tory rivals in polls.Cons: Lacks some support among grassroots Tories, having lost to Liz Truss in the last leadership election.

What she’s said: ‘I’ve been encouraged by support from colleagues who want a fresh start.’

Pros: Has cabinet experience yet can be seen as offering a new perspective.

Cons: Accused of being ‘part-time Penny’ for alleged lack of effort, a claim she has always denied.

The former PM has quit the race for No.10.