PM responds by saying Starmer talks about mandates and elections but Labour tried to overturn the “biggest democratic vote in our country’s history” – a Brexit dig.

He says the Tories’ mandate is based on the manifesto they were elected on, and reminds Labour they lost the last general election.

He pledges to work for a stronger NHS, better schools, safer streets, control of borders and levelling up.

‘He says one thing, does another’ – Starmer

Starmer says PM “says one thing and does another” when it comes to levelling up in the north.

He repeats his call for a general election.

He points out that Sunak was beaten in the summer leadership contest by Liz Truss – who herself was “beaten by a lettuce“.

Mistakes were made – Sunak

Sunak makes a dig saying Starmer doesn’t leave north London. But if he does, “he will know that there are deprived areas in our rural communities, in our coastal communities, and across the south”.He says this govt will support them.

He says he’s “the first to admit that mistakes were made” in last few weeks, but goes on to say “that is the difference” between him and the Labour leader.

He says he was honest over the summer about the difficulties the country faced but Starmer was noy.

“He promised his party he would borrow billions and billions of pounds, he told his party what it wanted to hear,” he says.

“Leadership is not selling fairy tales, it is confronting challenges and that is what the public will get from this government.”

Starmer says PM pretends to be on the side of working people but reminds people of the video that was leaked of Sunak saying he diverted public money from “deprived urban areas.”

“Rather than apologise or pretend he meant something else, why doesn’t he do the right thing and undo the changes he made to those funding formulas?,” Starmer says to loud cheers from the Labour benches.

The PM says difficult decisions need to be taken to restore economic stability and confidence.

PM confirms chancellor will set out that out in the Autumn statement in a few weeks.

He says the government will always protect the most vulnerable, as it did in Covid.

He says “we will restore economic stability in a fair and compassionate way”.

New PM Sunak is cheered as he arrives.

He is welcomed by Starmer and several point to the historic moment for Britain to have its first British Asian PM.

Then Starmer asks: “Was the home secretary right to resign last week for a breach of security?”

PM says Braverman made an error of judgement but she had recognised that and he welcomed her back into a united cabinet.

He says the new PM promised to govern with integrity but points he just re-appointed a woman forced to quit her job just a week ago.

Starmer asks: “Have officials raised concerns about his decision to appoint her?” 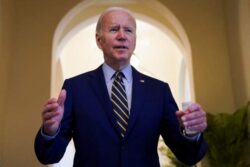 Democrats will keep Senate as control The House goes Red