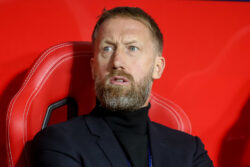 Danny Murphy has warned Graham Potter that his constant tinkering with his team may have a negative impact on Chelsea’s big name players.

Potter has made an unbeaten start to life at Stamford Bridge, with his latest win over RB Salzburg on Tuesday securing the Blues’ place at the top of their Champions League group.

During his time at Brighton, the English manager became well-known for chopping and changing his starting XI and formation, though they retained the same playing style.

This trend has continued at Chelsea, with Potter handing 19 players a start in his opening nine games whilst deploying six different formations in that time, and even making significant tactical changes during matches, with left-back Marc Cucurella notably subbed off for central-midfielder Mateo Kovacic after just 36 minutes of the clash against Manchester United.

While Murphy admires Potter’s abilities, he is worried that this level of tinkering will not work in the long run.

‘The only thing that concerns me, is that the best teams over the years to win the league, have basically had one way of playing and mastered it,’ the former Liverpool and Fulham midfielder told talkSPORT.

‘You can very quickly identify what formation they played. Arsenal’s invincibles: 4-4-1-1. Chelsea under [Antonio] Conte: 3-4-3. The great Manchester United team: 4-4-2. Liverpool and Manchester City in the last few years: 4-3-3.

Potter has tinkered with his players and formations a lot so far (Photo: Getty)

‘He’s [Potter] tweaking and tinkering the formation and personnel a lot. I’m all for adaptability, it’s not a bad thing but the best teams don’t tend to adapt every week for the opposition.

‘I think at the moment it’s understandable because he’s trying to find his best formation and what players he trusts in certain positions.

‘But moving down the line I would expect a more consistent best team and best formation and having confidence in that side.’

Perhaps the biggest question mark surrounding Potter’s appointment at Chelsea was how he would handle the big personalities and high-profile players that he scarcely encountered at his previous clubs.

So far, it seems to be going ok with several players sharing their delight of working under the 47-year-old, but Murphy remains concerned that not all of them will enjoy his methods, adding: ‘They want to build relationships, they want to know their team.

‘Sometimes with top players, and he’ll find this out as he goes along because he’s and intelligent manager, they don’t like constant change with tactics and personnel.’


MORE : Glenn Hoddle predicts the job Graham Potter will get after he leaves Chelsea

Nine games, zero losses – but how long will it stay that way?