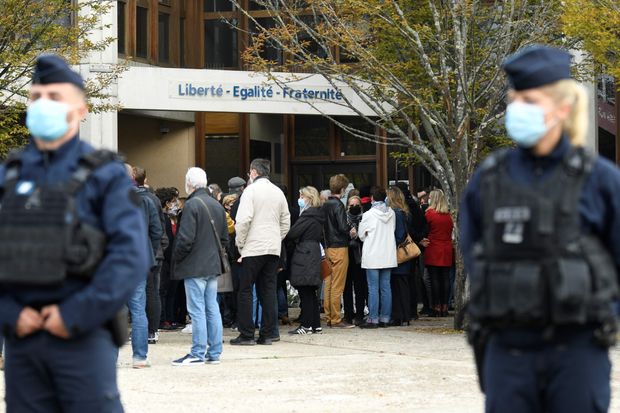 France’s interior minister claimed on Monday that the suspects behind the beheading of a French teacher had actively called for his death online.

Samuel Paty was beheaded on Friday outside his school in Conflans-Sainte-Honorine, in the northern suburbs of Paris. An 18-year-old Chechen man was shot dead by police.

“They apparently launched a ‘fatwa’ against the teacher,” Gerald Darmanin told Europe 1 radio on Monday, referring to the father of a student and an activist who had appeared together to complain about Paty to the headteacher of the school he worked at.

The student’s father posted a video on social media saying that Paty had shown an image of a naked man and told students it was “the prophet of the Muslims.” He called on other angry parents to contact him, and relay the message.

Paty – earlier in the month – had shown his pupils cartoons of the Prophet Muhammed that angered Muslims when they were published in satirical magazine Charlie Hedbo. Paty had shown the cartoon as part of a class on freedom of expression.

Eleven people are being held over the crime.

The killing of Sam Paty has sparked outrage and condemnation from political parties and President Macron, who called the crime an “Islamic terrorist attack.”

The attacker was born in Russia but had been living in the town of Evreux northwest of Paris. He was not previously known to the intelligence services.

On Sunday, demonstrators on the Place de la Republique held posters declaring: “No to totalitarianism of thought”, and “I am a teacher”.

“You do not scare us. We are not afraid. You will not divide us. We are France!” tweeted Prime Minister Jean Castex, who joined the Paris demonstration.

Friday’s attack was the second incident since a trial started last month over the Charlie Hedbo killings; last month a man wounded two in an assault near the former HQ offices of Charlie Hedbo.

Darmanin said on Monday there are more police operations underway.

The interior minister said there were about 80 probes underway int online hate speech in France and he was looking into whether certain groups from the French Muslim community should be dissolved following accusations of promoting violence and hate.

A police source told Reuters news agency that France was preparing to expel 231 foreigners on a government watch list for suspected hardline religious beliefs. It was not immediately clear if Monday’s operations were connected.

My Tweets
We use cookies to help identify your computer so we can tailor your user experience, track shopping basket contents and remember where you are in the order process. WTX News Our Cookie Policy
Belgium again shutters bars and restaurants amid dramatic Covid-19 wave
Israel and Bahrain peace deal; Formalise diplomatic ties following Trump-brokered deal
To Top
Weekly