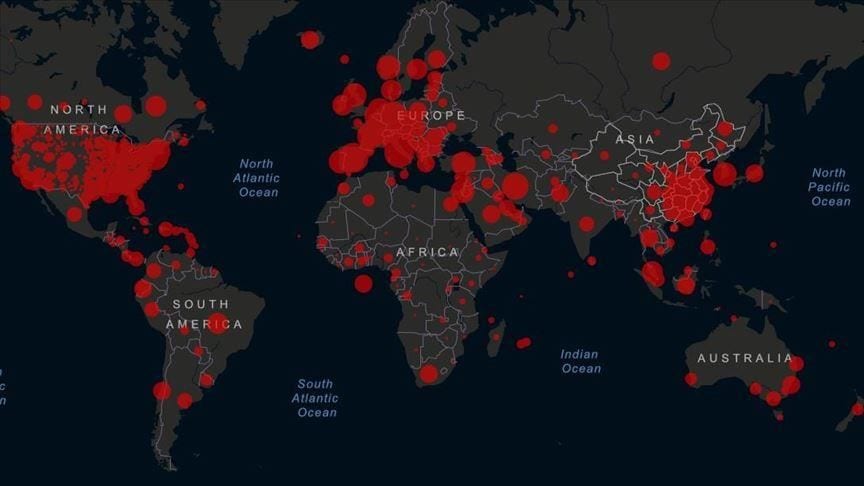 Here are the latest updates of the day

Russian authorities said they had recorded 11,012 new cases of the Coronavirus in the last 24 hours, bringing the nationwide tally to 209,688.

Russia’s task force said 88 people had died in the past day, pushing the national death toll to 1,915.

Russian cases have become the fifth-highest in the world, overtaking French and German infections this week.

Malaysia’s government extended the time frame for movement and business curbs by another four weeks to June 9, amid a gradual reopening of economic activity stunted by the pandemic.

Earlier this week, businesses were allowed to be resumed under strict health guidelines, after having to close shop for two months as health authorities worked to contain the pandemic. Malaysia has so far reported 6,589 cases with 108 deaths.

Existing rules under a conditional movement control order remain in place until the new expiry date in June, which include practising strict hygiene and social distancing, Prime Minister Muhyiddin Yassin said in a televised address.

Thailand reported five new cases but no losses, bringing the total to 3,009 cases and 56 deaths since the outbreak started in the country in January.

However, there are four more infected people from the resort island of Phuket, who will be included in figures to be reported on Monday, said Taweesin Wisanuyothin, spokesman for the government’s Centre for Covid-19 Situation Administration.

Of the new cases reported on Sunday, two were linked to previous cases and three had travelled abroad, he said.

Slowing numbers of new cases have prompted Thailand to allow some businesses to reopen after weeks of semi-lockdown.

Seoul closes bars and clubs over fears of a second wave

South Korea’s capital has ordered the closure of all clubs and bars after a burst of new cases sparked fears of a second coronavirus wave as President Moon Jae-in urged the public to remain vigilant.

The nation has been held up as a global model in how to curb the virus, but the order from the Seoul mayor on Saturday followed the new infection cluster in Itaewon, one of the city’s busiest nightlife districts.

More than two dozen cases were linked to a 29-year-old man who tested positive after spending time at five clubs and bars in Itaewon last weekend.

Of the 34 new cases, 26 were domestically transmitted infections and eight were imported cases, the Korea Centers for Disease Control and Prevention (KCDC) said.

Sunday’s total was the highest since April 9. After battling the first major epidemic outside China, South Korea posted zero or very few domestic cases over the past 10 days, with the daily tally hovering around 10 or less in recent weeks.

Sweden admits failure to protect the elderly in care homes

Bjorn Branngard’s mother died in a Stockholm nursing home where five of the eight people in her section and more than a third of residents have so far succumbed to the virus.

“They didn’t have time to take care of my mother,” he told AFP.

Her test came back negative two days after her death, but Branngard, who claims she died of neglect, says the nursing home staff lacked the protective gear and were spreading the virus around the home.

Sweden, whose softer approach to the pandemic has accumulated international attention, admits it has failed to adequately protect the elderly, with around half of Covid-19 deaths occurring among nursing home residents.

Australia’s biggest state to ease lockdown from May 15

The state has been worst hit in Australia, with about 45% of the country’s confirmed cases and deaths. However, it recorded just two new cases on Saturday out of nearly 10,000 people tested, clearing the way for a cautious loosening of lockdown measures.

From May 15, New South Wales will allow cafes and restaurants to seat 10 patrons at a time, permit outdoor gatherings of up to 10 people, and visits of up to five people to a household. Playgrounds and outdoor pools will also be allowed to reopen with strict limits.

The moves are in line with a three-step plan to relax lockdown measures outlined by the Australian government on Friday, which would see nearly 1 million people return to work by July.

3 members of the White House virus task force in quarantine

Three members of the White House coronavirus task force, including Dr Anthony Fauci, placed themselves in quarantine after contact with someone who tested positive for Covid-19, another stark reminder that not even one of the nation’s most secure buildings is immune from the virus.

Fauci, the director of the National Institute of Allergy and Infectious Diseases and a leading member of the task force, has become nationally known for his simple and direct explanations to the public about the disease.

Also quarantining are Dr Robert Redfield, director of the Centers for Disease Control and Prevention, and the commissioner of the Food and Drug Administration, Stephen Hahn.

Fauci’s institute said that he has tested negative for Covid-19 and will continue to be tested regularly. It added that he is considered at “relatively low risk” based on the degree of his exposure and that he would be “taking appropriate precautions” to mitigate the risk to personal contacts while still carrying out his duties. While he will stay at home and telework, Fauci will go to the White House if called and take every precaution, the institute said.

Redfield will be “teleworking for the next two weeks” after it was determined he had a “low-risk exposure” to a person at the White House, the CDC said in a statement Saturday evening.

The statement said he felt fine and has no symptoms.

All three men are scheduled to testify before a Senate committee on Tuesday. Sen. Lamar Alexander, R-Tenn ., the chairman of the panel, said the White House will allow Redfield and Hahn to testify by videoconference, a one-time exception to the administration’s policies on hearing testimony. The statement was issued before Fauci’s quarantine was announced.

In a leaked call, Obama describes Trump’s handling of coronavirus as chaotic

Former President Barack Obama described President Donald Trump’s handling of the pandemic as “chaotic” in a conference call with former members of his administration, a source said.

Obama has considerably kept out of the fray even as Trump has blamed him and his Democratic administration for a variety of problems related to having sufficient supplies to battle the pandemic that has killed more than 75,000 Americans.

But in his call on Friday with 3,000 members of the Obama Alumni Association, people who served in his administration, Obama urged his supporters to get behind Democratic presidential candidate Joe Biden, who is trying to unseat Trump in the November 3 election.

The contents of the call were confirmed to Reuters.

Brazil, the hardest-hit Latin American country, has surpassed 10,000 deaths, according to figures released by the Ministry of Health.

Confirmed cases in Panama reached 8,282 on Saturday, a rise of 212 from the previous day, the health ministry said.

The central American country’s deaths climbed by six to 237, the ministry added.

Nigeria’s economic hub emerged on Monday from a five-week stay at home order that left the city’s large number of poor struggling to make ends meet.

But since the easing of the restrictions people have been seen thronging markets and banks despite orders remaining in place to avoid mass gatherings.

“It is disappointing to see the crowd at banks and markets across the state flouting the guidelines,” Lagos governor Babajide Sanwo-Olu wrote on Twitter.

“We will be forced to take the painful decision of bringing the state under lockdown if it remains clear that Lagosians are determined to flout the rules.”

Nigeria, Africa’s most populous nation, has confirmed 3,912 infections and 117 deaths from the novel coronavirus.

New York Gov. Andrew Cuomo, who has won bipartisan praise for rallying supplies for his ravaged hospitals and helping slow the coronavirus, is coming under increasing criticism for not bringing that same level of commitment to a problem that has so far stymied him: nursing homes.

In part-lecture, part-cheerleading briefings that have made him a Democratic counter to President Donald Trump, Cuomo has often seemed dismissive and resigned to defeat when asked about his state leading the nation in nursing home deaths.

“We’ve tried everything to keep it out of a nursing home, but it’s virtually impossible,” Cuomo told reporters.

“Now is not the best time to put your mother in a nursing home. That is a fact.”

Of the nation’s more than 26,000 deaths in nursing homes and long-term care facilities, a fifth of them — about 5,300 — are in New York, according to a count by The Associated Press, and the toll has been increasing by an average of 20 to 25 deaths a day for the past few weeks.

“The numbers, the deaths keep ticking up,” said Marydel Wypych, an advocate for older adults in the Rochester area.