You’ve probably seen “Roe v Wade” trending all over social media over the past week as American abortion laws hit the mainstream news. We break down what’s happening and what it means for the future.

If the landmark decision is overturned this summer, 13 states with ‘trigger laws’ would automatically make abortion illegal and several others are likely to pass laws quickly.

Protests have been happening all across the United States following a leak of a US Supreme Court document which details provisional plans to overturn Roe v Wade. The leak – which was featured in Politico – was confirmed to be authentic by the US Supreme Court but said it does not represent a final decision.

Roe v Wade is a landmark 1973 ruling that protects the constitutional right to have an abortion.

The leak was a 98-page draft majority opinion published by Politico, which states there are plans to overturn the case as well as a subsequent 1992 decision – Planned Parenthood vs Casey – which maintained the right to have an abortion.

The author of the leaked document, Justice Samuel Alito wrote that “Roe was egregiously wrong from the start,” before stating that the decision of whether or not to ban abortion should be returned to individual states.

What are the current US abortion laws?

Abortion is currently legal in the United States via Roe v Wade, which decreed in 1973 that a balancing test must be put in place trying state regulation of abortion during the three trimesters of pregnancy.

Every US State has at least one abortion clinic but individual states can regulate the use of abortion.

Several states have passed “trigger laws” which would automatically make abortion illegal in the first and second trimesters if Roe v Wade is overruled.

Alabama, Arizona, Arkansas, Michigan, Mississippi, Oklahoma, West Virginia and Wisconsin all have unenforced abortion bans dating back to before Roe which could be enforced if the ruling is overturned.

The 1992 case of Planned Parenthood vs Casey upheld the right to have an abortion established in Roe but allowed states to pass more restrictions, as long as they did not pose an “undue burden”.

What could happen if Roe v Wade is overturned?

The leaked document suggests that the Supreme Court could pass a motion deciding that Roe v Wade was wrongly decided because the US Constitution makes no specific mention of abortion rights.

If it went ahead, the decision would fall into line with campaigns from Christian conservatives and many Republican lawmakers and officeholders. It is believed the document was drafted in reference to the case known as Dobbs vs Jackson Women’s Health Organisation – challenging Mississippi’s ban on abortion after 15 weeks.

An official ruling is expected before the end of June but the leaked document suggests that a court majority wanted to uphold Mississippi’s abortion ban and that there could be five votes to overturn Roe.

If the decision is overturned this summer, 13 states with trigger laws would immediately make abortion illegal and a number of others are likely to pass laws quickly.

Other states including Arizona, Michigan, Wisconsin and West Virginia have pre-Roe abortion bans on the books that would become enforceable again.

If this happened, abortion could become illegal in nearly half of all US states and according to healthcare organisation Planned Parenthood, 36 million women could lose access to abortions.

Abortion laws US – the future

If Roe is overturned, abortion is likely to remain legal in liberal states, but overturning the case would still be the biggest blow to women’s reproductive rights in the US in the past 50 years.

“The Republican-appointed Justices’ reported votes to overturn Roe v Wade would go down as an abomination, one of the worst and most damaging decisions in modern history,” said US House of Representatives speaker Nancy Pelosi and Senate majority leader Chuck Schumer, both Democrats.

The news has come just a little more than six months before the mid-term elections that will determine if Democrats hold their razor-thin majorities in the US Congress for the next 2 years of president Biden’s term in office.

Democrats say the draft opinion underscores the importance of this year’s elections, in which they are seeking to maintain control of the House and Senate. Republicans criticise the leak and suggest it was an attempt to inappropriately pressure the court into changing course.

Former US Secretary of State Hillary Clinton responded to the leaked draft saying: “This decision is a direct assault on the dignity, rights, and lives of women, not to mention decades of settled law.

“It will kill and subjugate women even as a vast majority of Americans think abortion should be legal. What an utter disgrace.”

The anti-abortion group the Susan B Anthony List welcomed the news.

“If Roe is indeed overturned, our job will be to build consensus for the strongest protections possible for unborn children and women in every legislature,” said its president, Marjorie Dannenfelser, in a statement.

Roe v Wade – what was the landmark case about?

In 1969, a 25-year-old single woman, Norma McCorvey under the pseudonym “Jane Roe”, challenged the criminal abortion laws in Texas. The state forbade abortion as unconstitutional, except in cases where the mother’s life was in danger. 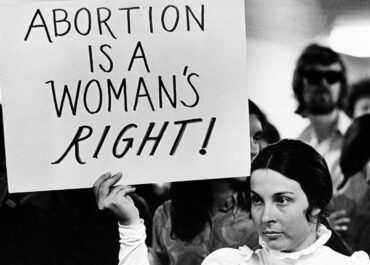 Ms McCorvey was pregnant with her third child when she filed the case, and claimed that she had been raped. But the case was rejected and she was forced to give birth.

In 1973 her appeal made it to the US Supreme Court, where her case was heard alongside that of a 20-year-old Georgia woman, Sandra Bensing.

They argued that abortion laws in Texas and Georgia went against the US Constitution because they infringed a woman’s right to privacy.

By a vote of seven to two, the court justices ruled that governments lacked the power to prohibit abortions.

They judged that a woman’s right to terminate her pregnancy was protected by the US constitution.

It did not create a European-style consensus over abortion in the US, but a partisan and unstable mess

News has leaked that the US Supreme Court plans to overturn the 1973 ruling on abortion known as Roe v Wade. Cue overreaction and misinformation. Scrapping Roe would not ban abortion, it would send the issue back to the states, where locals get to decide whether to tolerate or restrict it. This is about democracy and the question of who governs: the people or the courts?…

Roe v. Wade Is on Life Support. How The Fuck Did We Get Here?

The short answer is that Republicans played dirty and won and Democrats played pure and lost. The full story, however, is longer, stranger, and even uglier

If the US supreme court does vote to overthrow Roe v Wade, many Americans in need of surgical abortions could be forced to travel to Canada or Mexico