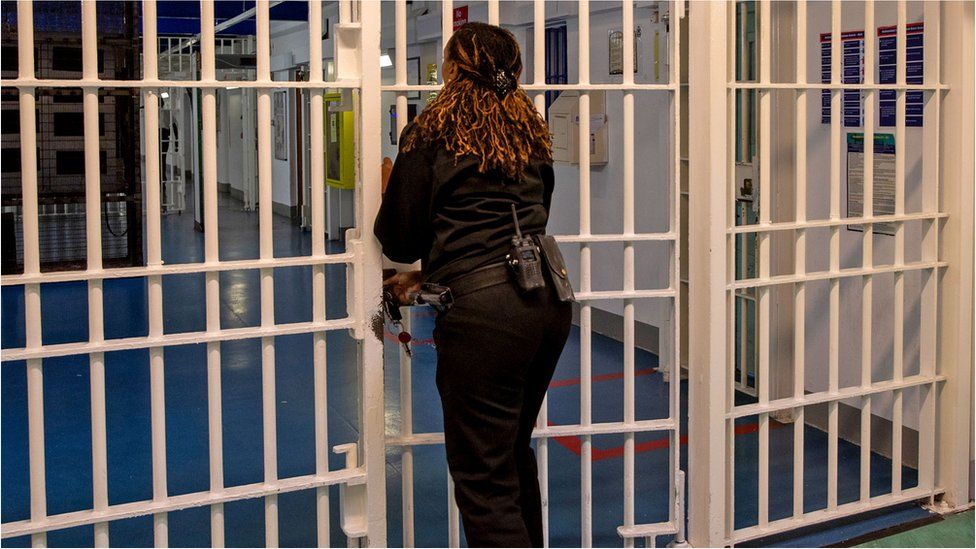 BBC News says prisoners in England’s jails have been locked in their cells for more than 90% of the day to keep them safe from Covid-19, the prisons watchdog says.

And the extra restrictions have led to a decline in their mental and physical health and a rise in drug-taking and self-harm.

Predictions up to 2,000 inmates would die in the pandemic in England and Wales without action have been avoided.

Half of UK exporters to EU are having Brexit difficulties, survey finds

The Guardian says half of British exporters to the EU are facing difficulties with mounting Brexit red tape and border disruption after a month of the new rules, according to one of the most comprehensive business surveys since leaving the bloc.

The British Chambers of Commerce (BCC) said that 49% of UK-based exporters in a survey of 470 firms had suffered problems with post-Brexit arrangements since the start of the year, as companies struggled to adapt and faced higher costs due to extra border checks and paperwork.

EU chief admits to failings in Covid vaccine rollout, bloc was ‘too optimistic’

France24 says Ursula von der Leyen admitted the EU’s much-criticised approval and rollout of vaccines against Covid-19 could be partly blamed on the bloc being over-optimistic, over-confident and plainly “late.”

She defended the EU’s overall approach of trying to beat the pandemic with a unified vaccine plan for its 27 nations, even if she admitted mistakes in the strategy to quickly obtain sufficient vaccines for its 447 million citizens.

“We are still not where we want to be. We were late to authorise. We were too optimistic when it came to massive production and perhaps we were too confident that, what we ordered, would actually be delivered on time,” von der Leyen told lawmakers in the European Parliament.

Arab News says the economic and financial crisis in Lebanon is responsible for the country’s worsening domestic violence, according to women’s rights groups.

Four women have been murdered over the past month by male relatives as Lebanon is in the depths of a dire economic situation, exacerbated by Covid-19 lockdowns and the Beirut explosion.

“The reason behind this rise in violence is the economic and financial situation,” Hayat Mirshad, the co-founder and co-director at FE-MALE, told Arab News.

Aljazeera says India and China have agreed to disengage troops from a bitterly contested lake area in the western Himalayas, the Indian defence minister said, in a breakthrough after a months-long standoff on the disputed border.

Rajnath Singh told Parliament on Thursday the accord had been reached after several rounds of talks between military commanders and diplomats.

“Our sustained talks with China have led to agreement on disengagement on the north and south banks of the Pangong lake,” he said.

VOA says Saudi activist Loujain al-Hathloul was released from a Saudi prison after spending nearly three years behind bars, according to her family.

Hathloul, a 31-year-old activist who has called for reforms to laws governing women, was arrested in 2018 and sentenced to six years on terrorism charges that the UN had deemed “spurious.”

“Loujain is at home!!!!!!” her sister Lina tweeted Wednesday.

TRT World says impeachment prosecutors have aired terrifying, never-before-seen footage of senior US politicians fleeing for their lives during the Capitol attack by Donald Trump supporters on day two of the Trump impeachment trial.

With painstaking, graphic presentations, Democratic impeachment managers on Wednesday walked senators through hours of video, some of which came from security cameras and police bodycams and was being aired for the first time.

The aim was to remind all watching just how bad January 6 got when a mob stormed Congress after Trump told a rally near the White House that his failure to win reelection was due to vote-rigging.

A cold but dry and sunny day for many. Turning cloudier and windier over parts of Northern Ireland, Wales and south-west England later on. A chance of snow in the far south-west later.

Cold and clear for many, mainly in the eastern half of the UK. Turning cloudier and windier from the west, with a few snow showers in Northern Ireland. A few wintry showers in north-east Scotland.

"I'm cancelling my Disney plus"
"I'm not going to watch anything by LucasFilms ever again!" #canceldisneyplus pic.twitter.com/tPjhlP3l5s

Feel bad for people who got fit in quarantine but now have to STAY fit for like 7 more months before anyone sees. Shoulda paced yourselves

Bucket List Travel: Our Top 20 Places In The World

Toto, I’ve a feeling we’re not in Kansas anymore

Around 10,000 travellers from high-risk countries will avoid hotel quarantine every day, Labour claims

Around 10,000 travellers from higher-risk countries will avoid hotel quarantine every day because of “gaping holes” in the system, Labour has claimed.

Keir Starmer stepped up his criticism of the government for rejecting a crackdown on all arrivals, with an analysis of places where the new variants of Covid-19 are circulating – but which are not on the “red list”.

Those passengers will not be required to pay £1,750 to quarantine in a hotel for 10 days under the rules starting on Monday, although they must isolate in their homes. – The Independent

Is the UK making too much of the EU’s blunder over Northern Ireland?

The recent row over the European Commission’s ill-fated — and quickly ditched — proposal to invoke emergency provisions under Brexit deal concerning Northern Ireland has put the divorce agreement itself under the spotlight.

Against the backdrop of a chaotic first few weeks of post-Brexit trade, the British government has called for a “reset” in its relations with the EU.

Ahead of a meeting with Brussels officials on Thursday, the UK Brexit minister Michael Gove has said arrangements under the deal are “not working at the moment”. – Euronews

After a day of bloodshed in the US Capitol a majority of Republicans are still backing Trump.

Almost half the Republican voters support the mob of predominantly white Trump supporters who stormed the US Capitol, the seat of American legislature, on Wednesday.

In a sign of how deeply polarised the country has become, the poll found that Democrats were overwhelmingly opposed to the protests with 96 per cent strongly against it. – TRT World

Oman’s land border will remain closed until further notice to curb the spread of coronavirus, daily Times of Oman reported.
Citizens wishing to return home should do so before 10 a.m. on Feb. 21, 2021 as “no individuals will be allowed to enter the Sultanate till the closure of land borders is lifted,” the report added.
The closure initially went into effect on Jan. 18 following Oman’s detection of its first case of the variant of the virus that emerged in Britain, on a resident who arrived from the UK. – Arab News

Yoshiro Mori, president of the Tokyo 2020 Olympics organising committee, is set to step down over sexist remarks he made that women talked too much, the Fuji News Network reported on Thursday.

The comments, made at a Japanese Olympic Committee board meeting in the first week of February, set off a firestorm at home and abroad and could become the latest obstacle to the 2020 Summer Games, already postponed for a year due to the coronavirus pandemic. – CNA

NASA announced Feb. 9 it wants to obtain a seat on the next Soyuz mission to the International Space Station, launching in just two months, to ensure a U.S. presence on the station in the event of any commercial crew delays.

In a procurement synopsis posted late Feb. 9, NASA said it wanted the seat on the next Soyuz mission as it “minimizes risks associated with any interruption in U.S. crew member presence on ISS” that might be caused by problems with commercial crew vehicles. – SpaceNews

Rihanna’s Fenty fashion label to close down – Read on