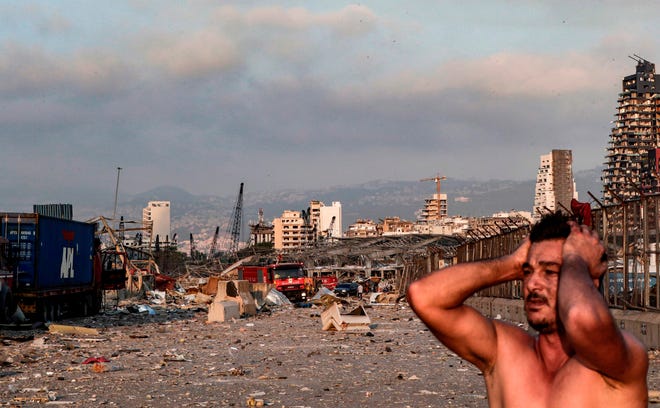 LIVE FROM THE MIDDLE EAST

At least 6 dead and more than 30 wounded after mass gunfire according to the Lebanese Red Cross.

The violence occurred as a rally – organised to demand the dismissal of the lead investigator into the Beirut explosion – took place.

Hundreds of protesters gathered at the Beirut Palace of Justice on Thursday calling fot the removal of the Judge who they believe is politically bias.

Gunfire was heard coming from the nearby Tayyoune neighbourhood, scattering the angry protesters.

Clashes have continued for hours. It remains unclear who the shooters are.

“The army rushed to cordon off the area and deploy in its neighbourhoods and their entrance. Patrols started as did the search for the shooters to detain them,” the armed forces said in a statement.

The PM has called for calm and warned against attempts to drag Lebanon into violence.

Here are the latest updates:

A relative calm had been restored.

“The guns have fallen silent and it seems there is an undeclared truce after four hours of clashes,” Zeina Khodr.

“At this juncture, it is critical to show maximum restraint, ensure that calm is restored and that citizens are protected,” Wronecka said in a tweet.

I am concerned about incidents of violence occurring in #Beirut today. At this juncture it is critical to show maximum restraint, ensure that calm is restored and that citizens are protected.

Beirut war zone – ‘Most serious and intense battle in years’

Beirut ‘war zone’ – ‘Most serious and intense battle in years’

“This is the most serious and intense gun battles in the streets of Beirut in years. The full area is a war zone, the army is out and in force but still unable to contain the situation, unable to stop these ongoing gunfire,” she said.

Statement on Beirut – ‘shots in the head with live ammunition’

Statement on Beirut – ‘shots in the head with live ammunition’

Following a meeting with heads of security agencies, Interior Minister Bassam Mawlawi has said in a statement:

“The security agencies knew about the gatherings that took place, but had no indicators that could develop into shots in the head with live ammunition.”

“Civil peace between the Lebanese is not to be played with.”

Mawlawi said an investigation is ongoing and all security measures will be taken.

VIDEO – Lebanon – Gunfire in Beirut near protest, at least 6 dead – many injured

Children trapped due to clashes – AlJazeera

Children trapped due to clashes – AlJazeera

Al Jazeera’s Zeina Khodr, reporting from Beirut, says children were trapped at their schools by the clashes.

“People are trapped at home, some children are still trapped at school. People are terrified, they don’t know what is happening in their city. About 200 metres (656 feet) from here there is a decades-long dividing line dating back to the days of the civil war (1975-1990).

Pictures reportedly taken in a school in Furn Al Shebbak area [located in the center of the clashes currently taking place] – kids hiding in hallways and under their desks in class. We can Thank Hezbollah, Amal, LF, FPM, Marada for this shitty display of ‘nationalism’ #Lebanon https://t.co/OpF3CFizcW

Dozens of migrants killed as boat sinks off Syrian coast

Boat sinks off the coast in Lebanon – One child dead