Woman who hadn’t had an orgasm for seven years swears by this sex toy: ‘This toy is worth every single penny!’ 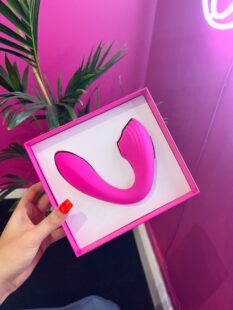 This baby gave one woman her first orgasm in seven years (Picture: SoDivine)

So Divine’s Pearl Vibe 2in1 G-spot & Suction Stimulator has got a double-pronged design for dual pleasure and it’s leaving its customers very satisfied.

Just days into the new year, one happy customer has been left stunned by the So Divine toy after years of an orgasm drought. The poor woman thought she would never hit that O again.

With a five-star review, she wrote: ‘I was apprehensive at first, but this toy is worth every single penny!

‘I hadn’t had an orgasm for seven years and was starting to think I never would again. However, within minutes, this toy had me orgasming. Turns out I just needed the right stimulation!’

What a happy way to start the year!

Matching Christmas pyjamas for the whole family… including the dog

From Dyson to Fenty, here are our top beauty and fragrance gifts this Christmas

To find a mode that suits you depending on the mood you’re in, there are 11 suction intensities and three speeds, plus seven G-spot patterns, meaning there are 21 ways to feel the vibe.

The Pearl Vibe has even got a flexible tip to cater for everyone’s shape and size so we all get that O that we need.

You can get 20% off Pearl Vibe using the code: PearlVibe20 here.


MORE : What’s the go with the exfoliating pads loved by Kylie Jenner and TikTok star Mikayla Nogueira as fans rave they ‘transform skin in days’

It’s all about double the fun with the Pearl Vibe 2in1.