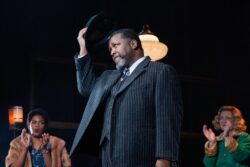 Wendell Pierce treated the audience member with kindness, despite them shouting in his face (Picture: Broadway World/REX/Shutterstock)

The Louisiana-born actor, 59, is currently performing on Broadway in Death of a Salesman, playing central salesman Willie Loman and starring opposite British actor Sharon D Clarke as wife Linda.

During their show at the Hudson Theatre on Wednesday (December 28), one heckler in the crowed forced the play to a halt at the beginning of the second act.

Footage captured by other ticket holders show the person demanding their money back while shouting at Pierce, clearly believing the show wasn’t up to standard.

Chaos ensued as everyone stood up from their seats, while the woman actually walked to the edge of the stage to talk to Pierce face-to-face.

However, the star was quickly able to capture everyone’s attention and had a truly excellent response.

As she continued to shout in his face, Pierce remained calm, telling her: ‘I understand.’

The actor is currently starring in Broadway’s Death of a Salesman (Picture: Broadway World/REX/Shutterstock)

It seemed Pierce was fully willing to pay the woman out of his own pocket as he pointed to himself and emphasised: ‘I will give you your money back.’

The woman eventually put on her coat and escorted out of the theatre by security, allowing the performance to continue.

After the clip of the disruption circulated online, fans had a lot of praise for Pierce and the ‘gracious’ manner in which he dealt with the woman.

The actor managed to defuse the chaotic situation and get the show back on track (Picture: Matt Winkelmeyer/Getty Images)

Claiming that the audience member was drunk, one fan tweeted: ‘@WendellPierce was quite gracious throughout the ordeal which reportedly went on for 30+ minutes! For a live theatre performance, that can really take an actor out of their flow. But the show went on.’

Another hailed the star an ‘absolute legend for his performance and the way he handled this situation’, while one praised him for treating her ‘with respect and kindness.’

Plenty have also left glowing reviews for Pierce’s performance in Death of a Salesman, with one tweeting that they were ‘absolutely floored’ by his talents.

‘@WendellPierce you were nothing short of AMAZING in this play!’, tweeted another.


MORE : Kim Kardashian, 42, not ruling out having more kids after divorce from Kanye West

The woman demanded her money back.