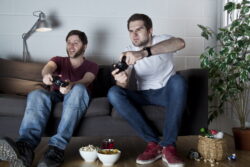 Gaming continues to be the most lucrative form of home entertainment in the UK, with total revenues rising last year to £4,660,000,000.

Early figures from the annual report of the Digital Entertainment and Retail Association (ERA) reveals that games accounted for 42.1% of all home entertainment spends in 2022, up 2.3% on 2021.

However, that’s with the obvious caveat that this is all based on revenues and games are considerably more expensive than other forms of entertainment, so it doesn’t mean that more people overall were playing games than listening to music or watching TV.

Of those sales almost 90% were digital, although that does include mobile gaming. Also, some publishers, most obviously Nintendo, don’t reveal their digital sales.

According to the ERA less than 30% of game sales were from mobile, which seems surprisingly low but perhaps there’ll be more details in the full report in March.

Previous figures suggested that overall video game sales fell by 6% in 2021, with console hardware sales down by as much as 29%.

‘While growth at 2.3% was lower than that of video or music, its scale is enormous and in terms of innovation and excitement it continues to set the pace for the entire entertainment sector.’

As she implies, video was the fastest growing segment of the home entertainment market last year, as subscription giants such as Netflix and Amazon Prime continue to fight for dominance.


MORE : Nintendo Switch was the UK’s best-selling console of 2022 but sales are down across the board

Gaming continues to be the most lucrative form of home entertainment in the UK, with total revenues rising last year to £4,660,000,000.