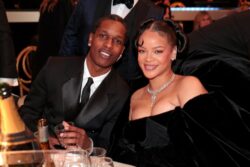 Rihanna and A$AP Rocky reportedly didn’t walk the Golden Globes carpet on Tuesday night, leading to speculation they’d be a no-show at the glitzy bash, despite RiRi being up for best song.

But *oh boy* were they in attendance, with Rihanna donning a scene-stealing black dress with oversized puff sleeves for the award show’s 80th ceremony.

As cameras panned around the star-studded audience, it was revealed that Rihanna and Rocky had seemingly skipped the carpet and headed straight inside to their table.

Beaming for photographers, the couple – who welcomed their first child last year – looked more loved-up than ever. We love to see it.

In the best song category, Rihanna, 34, was up against the likes of Lady Gaga and Taylor Swift.

Her banger Lift Me Up from Black Panther: Wakanda Forever earned her the nod, but all three ladies lost out on the gong to track Naatu Naatu from Telugu movie RRR.

As cameras panned around the star-studded audience, it was revealed that Ri-Ri and Rocky were in the audience (Picture: Christopher Polk/NBC via Getty Images)

That didn’t stop Rihanna from being centre of attention at the Globes, mind, with host Jerrod Carmichael giving her a special shout out at the ceremony.

Referencing the fan mania around the release of Rihanna’s much-anticipated new album, Carmichael told the hit-maker: ‘You know what? Honestly only because I see Rihanna is here, and I’m going to say something very controversial. I will actually get in trouble for this.’

He added: ‘Rihanna, you take all the time you want on that album, girl! Don’t let these fools on the internet pressure you into nothing!’

The lovebirds grabbed a bite to eat after the bash (Picture: BACKGRID)

Meanwhile, actress Niecy Nash, who presented an award on the night, told Rihanna that she’d actually dressed up as her on Halloween.

‘Rihanna, I love you, and I dressed up as you for Halloween. I just had to say that. All right. Had to take my moment,’ the Dahmer star quipped.

Rihanna’s Golden Globes appearance comes after it was revealed that her Super Bowl show next month will be ‘unlike anything you’ve seen before’.

The Umbrella hitmaker will make a spectacular return to the stage in February for the Halftime Show, after stepping away from music to focus on her brands Savage x Fenty, Fenty Beauty, and Fenty Skin.

Speaking about her set, musical director Adam Blackstone said it’s going to be ‘unlike anything you’ve ever seen before’.

Lifting the lid on the creative process and what it’s been like working with the star, he told Rolling Stone: ‘It’s been cool. We’re spearheaded by the team at Roc Nation, Willow, incredible choreographer and creative director Parris Goebel, and my partner on this is Omar Edwards as the co-musical director.

‘So, it’s been really cool, man. The thing about Rihanna is that she’s so creative. She is boundary-pushing at all times, so it’s going to be unlike anything you’ve ever seen before, and we always try to push the envelope with her.’

Best Picture, Musical or Comedy: The Banshees of Inisherin

Best Performance by an Actor in a Motion Picture, Drama: Austin Butler (Elvis)

Best Performance by an Actress in a Motion Picture, Drama: Cate Blanchett (Tár)

Best Performance by an Actress in a Motion Picture, Musical or Comedy: Michelle Yeoh (Everything Everywhere All at Once)

Best Performance by an Actor in a Motion Picture, Musical or Comedy Colin Farrell (The Banshees of Inisherin)

Best Supporting Actor – Motion Picture: Ke Huy Quan (Everything Everywhere All at Once)

Best Performance by an Actor in a Television Series, Drama: Kevin Costner (Yellowstone)

Best Performance by an Actress in a Television Series, Drama: Zendaya (Euphoria)

Best Limited Series, Anthology Series or a Motion Picture made for Television: The White Lotus (HBO)

Best Performance by an Actress, Limited Series, Anthology Series or a Motion Picture made for Television: Amanda Seyfried (The Dropout)

Best Performance by an Actress in Supporting Role, Limited Series, Anthology Series or a Motion Picture made for Television: Jennifer Coolidge (The White Lotus)