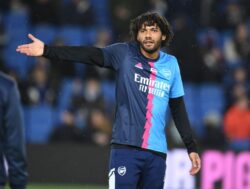 Unai Emery is reportedly keen to bring Mohamed Elneny to Aston Villa as the Arsenal star enters the last six months of his contract.

Elneny joined Arsenal in January 2016 from Basel and has gone on to play 154 times for the Gunners, winning one FA Cup and two Community Shields in his time at the Emirates.

While Mikel Arteta still values the defensive midfielder as a useful part of his squad, he has hardly featured this season, making just seven appearances, only three of which have been starts, so far.

While a lengthy thigh injury has contributed a lot to that, it does not seem likely that Arsenal will renew Elneny’s current contract beyond the summer of 2023, and as such Arteta may look to cash in on the player while he still can.

And if he does move on, the 30-year-old could well keep playing in the Premier League, with The Mirror reporting that Emery wants to reunite with Elneny at Villa Park.

Emery managed Elneny during his short spell at Arsenal, though he did not pick the Egyptian international too often in the 2018/19 season and even loaned him out to Besiktas at the start of the following campaign.

Nevertheless, the manager is looking for reinforcements in January as he looks to build upon his good start at Villa.

The former PSG boss took over the Villans in November after Steven Gerrard was sacked and has already picked up impressive wins over high-flying Manchester United, Brighton and Tottenham.

While the reports do claim that Arsenal would be willing to sell Elneny this month for around £6million, it would be surprising to see Arteta let any player go while they’re pushing for the title.

After 17 games, the Gunners are five points clear of Manchester City at the top of the Premier League and will need all the squad depth they can if they want to win their first league title since 2004.

Arsenal are looking to strengthen in January but not in midfield, with their focus currently on Shakhtar winger Mykhailo Mudryk.


MORE : Emile Smith Rowe back in Arsenal training and hopes to return for FA Cup tie

Could Emery raid his former club in January?