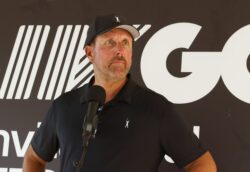 Phil Mickelson is among those who controversially joined LIV (Picture: Getty)

The Masters will allow players who have joined the controversial LIV Golf circuit to enter next year’s tournament.

The PGA Tour has suspended members who have competed in the Saudi-funded breakaway without permission and R&A chief executive Martin Slumbers said in July banning LIV players from next year’s Open was ‘not on the agenda’, but did not rule out changing the championship’s entry criteria.

Masters chairman Fred Ridley yesterday took a similar position, confirming the rebels can play next year while hinting there may be changes to future entry requirements.

Former champions Phil Mickelson, Dustin Johnson, Sergio Garcia and Bubba Watson are among those to have joined LIV, while others who remain inside the world’s top 50 will be eligible to compete at Augusta.

Ridley said: ‘Regrettably, recent actions have divided men’s professional golf by diminishing the virtues of the game and the meaningful legacies of those who built it.

‘Although we are disappointed in these developments, our focus is to honour the tradition of bringing together a pre-eminent field of golfers this coming April.

‘Therefore, as invitations are sent this week, we will invite those eligible under our current criteria to compete in the 2023 Masters tournament.

‘Any changes to invitation criteria for future tournaments will be announced in April.

‘We have reached a seminal point in the history of our sport. We have faith that golf, which has overcome many challenges through the years, will endure again.’


MORE : Golfer ‘bit off rival’s nose’ in row over game – and it’s never been found


MORE : Golf’s charity match not 2022’s most heart-racing moment but still a bit of a jewel