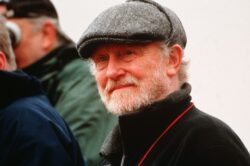 Director Mike Hodges, best known for films including Get Cater, The Terminal Man and Flash Gordon, has died aged 90.

The news was revealed by longtime friend and producer Mike Kaplan, who worked with Hodges on his final feature I’ll Sleep When I’m Dead.

Hodges died at his home in Dorset on Saturday, with The Hollywood Reporter reporting he died of heart failure.

Hodges got his feature start by writing and directing the British gangster film Get Carter, with the seminal film starring iconic actor Michael Caine, before he went on to replace Nicolas Roeg as director of Flash Gordon.

As well as Flash Gordon and Get Carter, the filmmaker was known for 1972’s Pulp, working with Sir Michael once more, as well as 1974’s The Terminal Man starring George Segal, 1989’s and Black Rainbow with Rosanna Arquette.

Born in Bristol, Hodges is a qualified accountant and got his start in British television before landing the gig of directing Sir Michael – who he would go on to become a collaborator of – in 1971’s Get Carter after impressing the film’s producer on an ITV Playhouse telefilm.

Working with Sir Michael Caine on Get Carter in the 70s (Picture: Mgm/Kobal/REX/Shutterstock)

The film, which also starred Britt Ekland, centred Sir Michael as hitman Jack Carter, who returns to Newcastle for his brother’s funeral and soon suspects foul play was involved with his death.

Get Carter is considered one of the greatest British gangster movies of all time and has a 87% rating on Rotten Tomatoes.

It’s reported he died at his home in Dorset.