Shipwrecked fisherman survives by clinging to buoy for two days 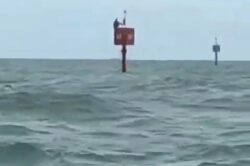 A Brazilian fisherman who fell from his boat managed to survive two days at sea by clinging to a buoy.

David Soares, 43, had battled the waves of the Atlantic Ocean for four hours after he went overboard.

He had slipped off his boat on Christmas Day, later telling Brazil’s G1 news site: ‘For me the first 10 minutes were the most difficult because I wanted to get back to the boat at all costs.’

But high currents made the task impossible.

Once David realised he would be unable to return to the boat, the fisherman took off both his shirt and trousers to lighten his weight.

‘The water was choppy and it was windy… so I decided to let myself be carried along by the current in order to use less energy,’ he added.

After four hours, David reached a signal buoy near the port of Açu.

He scaled the structure and recalled thinking he might ‘die of cold before any help would arrive.’

It was a miracle he was found

But David was eventually spotted by another fisherman – who captured the inspiring rescue on camera.

Despite the ordeal and being treated for dehydration, the brave fisherman has already returned to the water to work.

He scaled the structure and recalled thinking he might ‘die of cold before any help would arrive.’.