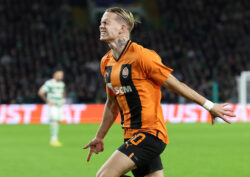 Arsenal have been warned they must pay ‘Jack Grealish money’ to land their top January target Mykhaylo Mudryk.

The Gunners launched their opening bid for the Shakhtar Donetsk winger this week with their offer worth up to €65million [£57million] – €40m up front with €25m to follow in add-ons.

That offer was rejected by the Ukrainian side on Tuesday however, falling someway short of their valuation.

Arsenal still hope to get a deal done this month with Mudryk making no secret of his desire to join Mikel Arteta’s side.

Shakhtar officials have previously suggested Arsenal would have to pay a fee similar to what Manchester United stumped up to bring Antony from Ajax during the summer transfer window, a deal that set Erik ten Hag’s side back £85m.

But Shakhtar director Carlo Nicolini now insists Arsenal will have to set a new or match the existing Premier League record transfer fee, the £100m Manchester City paid Aston Villa for Grealish in 2021, to get their man.

Nicolini told Calciomercato: ‘Our sporting director said that, to sell Mudryk, we need an offer closer to Grealish than Antony. We’re not even considering a bid with €40m (£35.3m) as fixed fee.’

Mikel Arteta was quizzed on the social media activity post-match but was adamant that the Shakhtar star’s actions should not be taken as clue as to his potential destination in January.

He said: ‘The good thing is that in England you don’t have many other matches in other countries.

‘We are the only ones playing through Christmas so hopefully a lot people have watched our game and we give them a good show.’

Asked for a response to speculation that Arsenal have launched an opening offer, Arteta added: ‘You know I never speak about players that are not with us and I know in this transfer market you have to ask me the question.

The Gunners saw an opening offer rejected this week.