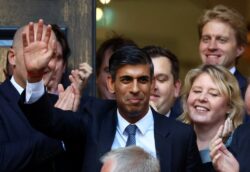 The UK’s next prime minister Rishi Sunak was cheered as he arrived outside Tory party HQ this afternoon.

MPs gathered on the steps of the building, waiting to greet him, before he shook hands and embraced some of them and waved at onlookers.

He then went into the building, with the MPs following behind him.

So far, Mr Sunak has still not spoken publicly after winning the race to become leader of the Conservative Party and the country’s next prime minister almost two hours ago.

It is far removed from the celebratory nature of the previous leadership race, when Liz Truss stepped on stage as soon as her name was announced as winner of the ballot of Tory members.

Deputy Labour leader Angela Rayner claimed he was ‘already putting party before country’ by addressing Tory MPs before the public – after he spoke behind closed doors to MPs in a Commons committee room.

But responding to criticism of why he had not yet addressed the public, former leadership rival Kemi Badenoch said: ‘I’m quite sure you know that would be presumptuous as he has not yet been appointed by our Head of State as Prime Minister.

‘We need to move away from this sort of commentary which looks for the worst possible interpretation when someone is doing the right and proper thing.’

Just six weeks after being defeated by Ms Truss, Mr Sunak has completed a spectacular political comeback to become the next prime minister after rival Penny Mordaunt dropped out this afternoon.

He will be the UK’s first Hindu prime minister, the first of Asian heritage, and the youngest for more than 200 years at the age of 42.

Ms Mordaunt, the Commons Leader, bowed out of the race as she failed to get the 100 nominations from Tory MPs required by the 2pm deadline.

With Boris Johnson having ditched his own bid at a comeback, Mr Sunak will enter No 10 unopposed and avoid an online ballot of the Conservative members that rejected him for Ms Truss last month.

He now has the daunting task of leading the nation through an economic crisis only exacerbated by the chaotic legacy of Ms Truss, who was ousted after only six weeks in office.

In a statement posted online two minutes before the deadline, Ms Mordaunt said her opponent now has her ‘full support’.

‘These are unprecedented times. Despite the compressed timetable for the leadership contest it is clear that colleagues feel we need certainty today,” she said.

‘They have taken this decision in good faith for the good of the country.

‘Members should know that this proposition has been fairly and thoroughly tested by the agreed 1922 process.

‘As a result, we have now chosen our next prime minister.’

The former chancellor won the support of Conservative MPs to succeed Liz Truss as Tory leader on Monday and will enter Downing Street less than two months after he lost the last race.