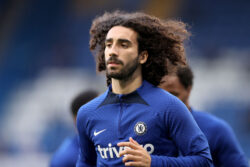 Cucurella recently spent a week in hospital, according to reports in Spain (Picture: Getty)

Chelsea defender Marc Cucurella is still recovering from a spell in hospital that saw him lose 5kg in weight, one of the reasons why he has been replaced early by Graham Potter in recent weeks.

The former Brighton defender was replaced after just 36 minutes during Saturday’s 1-1 draw with Manchester United at Stamford Bridge.

The Spain international was drafted in to replace the injured Kalidou Koulibaly but was sacrificed as Potter made another first-half tweak to his system, bringing on Mateo Kovavic as he sought to bring some balance to the Blues midfield.

Cucurella has completed just one full game since Potter’s appointment despite playing a key role under the manager at Brighton.

The Chelsea boss insisted replacing the defender so early in the game against United ‘wasn’t an easy decision to make’ and said the change was made to ‘create a bit more pressure and stop them [United] building their attacks.’

AS report however there were other mitigating circumstances leading to the defender’s early substitution. Their report claims Cucurella recently spent a week in a London hospital with tonsilitis, during which time he lost ‘between four and five kilos’.

The 24-year-old came out of hospital more than two weeks ago but Chelsea’s frantic schedule has prevented him from completing a full recovery after his spell on the sidelines.

The Spaniard was replaced before half-time on Saturday (Picture: Getty)

The Blues have already played seven games in October and are in action six more times before the World Cup break, with their final fixture against Newcastle United on 12 November.

Cucurella was also substituted as half-time in Chelsea’s 2-0 win over Aston Villa on 16 October with Potter again citing tactical reasons.

‘I thought we had to probably be a back five, more so, and be a bit stronger in the midfield area so we just had to adjust it,’ he said.

After his £63million arrival from Brighton, Cucurella started all but one of Chelsea’s first six league matches of the season.

After starting the 3-0 win over Wolves, Potter’s first home win as Blues boss, he has been replaced in Chelsea’s last three in the league.


MORE : Chelsea still keen on signing Arsen Zakharyan as they refuse to give up on Russian star

The Spain international was hooked before half-time.