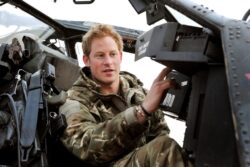 The Prince has spoken out about his time in the military (Picture: Getty)

Prince Harry has said joining the army was ‘turning pain into purpose’ as he killed 25 soldiers in Afghanistan.

The Duke, 38 told Anderson Cooper in a 60 minute special that ‘you don’t get a pass for being a prince’ when talking about starting military training.

It comes after the Prince was criticised for boasting about shooting down 25 members of the Taliban during the war in 2012.

Former soldiers have slammed the Prince for speaking about his military service, and it has also lead to ‘targets’ being put on British soldiers.

The Duke has spoken about his time in Afghanistan (Picture: CBS)

Anderson Cooper sat down with Harry for the 60 minutes exclusive interview (Picture: CBS)

Speaking to Anderson Cooper he said: ‘It got me out of the spotlight from the– from the U.K. press. I was able to focus on a purpose larger than myself, to be wearing the same uniform as everybody else, to feel normal for the first time in my life.

‘And accomplish some of the biggest challenges that I ever had. You know, I was training to become an Apache helicopter pilot. You don’t get a pass for being a prince.’

Harry accuses Royal family of ‘getting into bed with the devil’

He added: ‘There’s no prince autopilot button you (LAUGH) can press and just whff– takes you away. I was a really good candidate for the military.  I was a  young man in my 20s suffering from shock.

‘But I was now in the front seat of an Apache shooting it, flying it, monitoring four radios simultaneously and being there to save and help anybody that was on the– on the ground with a radio screaming, “We need support, we need air support.” That was my calling. I felt healing from that weirdly.

‘It felt like I was turning pain into a purpose. I didn’t have the awareness at the time that I was living my life in adrenaline, and that was the case from age 12, from the moment that I was told that my mom had died.’

Anderson said: ‘You say, “War didn’t begin in Afghanistan. It began in August 1997.”

Harry replied: ‘Yeah. The war for me unknowingly was when my mum died. ‘

The Prince has spoken out during a 60 minute interview with Anderson Cooper in the US.