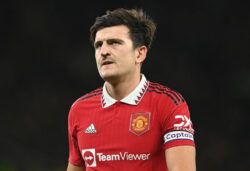 Maguire’s future at Old Trafford was placed in further doubt over the Christmas period when Ten Hag opted to play Luke Shaw in central defence ahead of Maguire.

Over the weekend, Maguire was linked with a switch to Villa after he was pictured in a restaurant near the club’s training ground.

But according to Manchester Evening News, United and Maguire both consider the link with Villa as ‘laughable’ and the club expect their captain to remain at Old Trafford until the end of the season.

The report also claims that Maguire was in the area as he was playing golf at The Belfry.

Meanwhile, Ten Hag has emphasised that Maguire will not be pushed out of United.

When asked last month if he believes Maguire could leave in January, Ten Hag said: ‘Only if he doesn’t want to be in these circumstances anymore.

‘Until that moment, I am happy with him. I have said it to him and you, I can do nothing more.

‘It is up to him to contribute to play himself into the team.’

Maguire was spotted near Villa’s training ground over the weekend.