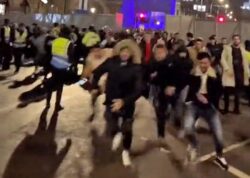 This is the disturbing moment a crowd of people without tickets for the New Year’s Eve fireworks display in London broke through the barriers.

Videos shared on social media show Metropolitan Police officers and stewards for the official event failing to stop the gatecrashers.

More than 100,000 people bought tickets for the 12-minute display set to music from Stormzy, Calvin Harris, Rihanna and Madness, with prices starting at £15 per person.

Held on the south bank of the Thames, next to the London Eye wheel, it was the first since 2019 and the first batch of passes sold out in a few minutes.

Some took their chances and stormed the barriers, running past police to get in.

A few officers can be seen trying to catch the gatecrashers, but their efforts were mostly unsuccessful.

The footage showed people tumbling to the ground in an attempt to evade them.

A statement from the force said: ‘Regrettably, a number of groups without tickets tried to aggressively force their way past hoardings and fencing.

‘Officers worked quickly in challenging circumstances to support the stewards and keep people safe inside and outside the ticketed areas.’

A beginner’s guide to using weight machines in the gym

What’s in store for today? Your horoscope for January 1, 2022

Over the course of the evening, eight people were arrested in the central London area.

These included for sexual assault, assault on an emergency worker and possession of an offensive weapon.

Police can be seen trying to catch the gatecrashers, but without success.