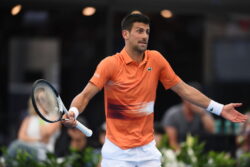 Novak Djokovic is currently in action at the Adelaide International (Picture: Getty)

Novak Djokovic is set to miss Indian Wells and the Miami Open in 2023 due to his ongoing desire to remain unvaccinated against COVID-19.

United States authorities confirmed on Wednesday that foreigners looking to enter the county will need to be vaccinated with a Transportation Security Administration statement revealing that restrictions will remain until April 10.

But Djokovic, who was won Indian Wells five times and the Miami Open six times, will not be present this year unless authorities provide him with an exemption.

The 21-time major winner – previously branded an ‘anti-vax poster boy’ – was unable to compete at the 2022 US Open due to his views on vaccinations against coronavirus.

His refusal to get the vaccine, a topic he has been outspoken on, also saw him engulfed in a political row when he travelled out for the Australian Open last year.

In the end he was deported from Australia and barred from playing after spending time locked up in an immigration facility, despite attempting to use a medical exemption to enter the country.

The 35-year-old Serbian will be present at this month’s 2023 Australian Open, though, after he was granted a visa in November.

Djokovic is looks to win the Grand Slam for the 10th time and equal Rafael Nadal on 22 major singles trophies, having moved ahead of Roger Federer’s 20 at Wimbledon 2022.

‘If I have to pick one country where I’ve had the most success, which treated me in the best way in terms of tennis, it’s here, definitely,’ Djokovic said this week.

Djokovic is currently in action at the the Adelaide International – where he is the top seed – and next faces French world No.64 Quentin Halys in the last 16.


MORE : What to expect from tennis in 2023 as Djokovic eyes GOAT status


MORE : The most iconic tennis moments of 2022 as Federer and Nadal cry and hold hands