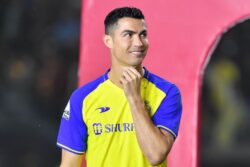 Cristiano Ronaldo has been unveiled as an Al Nassr player (Picture: Getty Images)

Cristiano Ronaldo says he had a wide range of options when he was looking for a new club to join, before completing his switch to Saudi Arabian side Al Nassr.

The veteran forward left Manchester United by mutual consent in November, with his contract being cancelled before it was due to expire at the end of the season.

He was quickly linked with the Saudi side but was not immediately confirmed as an Al Nassr player, which led to speculation as to where Ronaldo would end up next.

There did not seem to be clubs queueing up to sign the 37-year-old, but he says he had a string of options in front of him from all over the world, they just were not made public.

‘As nobody knows, I can say now I had many opportunities in Europe, many clubs in Brazil, Australia, the US, even in Portugal, many clubs tried to sign me,’ Ronaldo said at a press conference.

‘I gave my word for this club. I won everything, I played for the most important clubs in Europe and now it is a new challenge in Asia.’

Ronaldo is believed to have signed a deal that will make him the highest-paid player in history, earning around £177m-per-year and he believes it is all well deserved.

‘This contract is unique but I’m a unique player, so for me it’s normal,’ he said.

‘I know the league is very competitive, I saw many games. I hope to play after [Wednesday] if the coach thinks there’s a chance. I’m ready to keep playing football.’