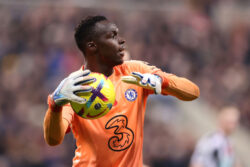 That’s according to former Red Devils striker Louis Saha, who believes the Senegal ace has proven himself as one of the best goalkeepers in the world.

De Gea’s form has been good so far this season but he made an awful mistake in a 3-1 FA Cup win against Everton on Friday.

The Spaniard has adapted well to Erik ten Hag’s requirements but the Dutchman would ideally like to upgrade his goalkeeper with one that is perfectly comfortable with playing out from the back.

De Gea is out of contract at the end of the season and United have resisted the urge to trigger a 12-month extension clause in his deal.

De Gea’s current deal expires at the end of the season (Picture: Getty)

De Gea is open to the idea but it could be the perfect opportunity to get the Spaniard off the books.

Mendy thrived following his move to Stamford Bridge in 2020 but he’s lost his place to Kepa in recent weeks.

And Saha believes United can captialise on his situation by buying him to replace De Gea.

‘De Gea is still right at the top level, but of course making mistakes like he did against Everton is never good.

‘Over the years, De Gea has done tremendous performances to save the team and he deserves the time and credit for that.

‘If De Gea doesn’t sign a new contract then a move for Chelsea goalkeeper Edouard Mendy would make perfect sense.

‘He has been one of the best goalkeepers in the world the last few years and I’m not sure what happened.’