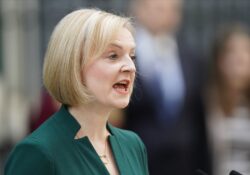 Truss showed a ‘lack of admiration’ towards Sunak in her final speech (Picture: PA)

Liz Truss ‘sneered and showed ‘lack of admiration’ towards Rishi Sunak in her final speech before resigning as Prime Minister, an expert has claimed.

The shortest serving PM in history gave a very short speech from outside of Downing Street after chairing her final cabinet meeting.

She claimed to have secured some ‘significant achievements’ and spoke of cutting taxes, scrapping a planned hike in national insurance, supporting Ukraine and reducing energy bills.

She cited ‘lower taxes, so people keep more of the money they earn’ as one of her achievements before wishing Sunak – who previously opposed her tax cutting agenda – ‘every success, for the good of our country.’

But body language expert Judi James has said her expressions did not match her words, as she spoke about soon-to-be Prime Minister Rishi Sunak.

The former PM showed a lack of emotion as she gave her final statement (Picture: Rory Arnold / No10 Downing Street)

She gave a small sneer towards Rishi, according to Judi James (Picture: Rory Arnold / No10 Downing Street)

She refused to mask her feelings in her goodbye sign-off (Picture: REUTERS)

Judi told Metro.co.uk: ‘There was one revealing ‘tell’ in the shape of a micro-gesture when she said Rishi’s name, though.

‘Her verbal message was generous but her right cheek pulled up in what looked like an involuntary spasm that created a small sneer, suggesting a masked lack of any genuine liking or admiration for the incoming PM.’

Truss was met by her family including her daughters and her husband before she headed to Buckingham Palace (Picture: James Veysey/Shutterstock)

She said there was a lack of display of emotion from Truss, and that it looked although she was wearing more make-up to stop her looking ‘drained’.

Judi said: ‘There were no tears from Truss, no public displays of emotion, not even a glance or touch aimed at her husband and two daughters who waited watching behind her before marching off towards the cars at the end, with Truss still very much in leadership mode, choreographing the final exit.

‘Truss delivered this speech wearing the same sickly, asymmetric smile as she wore when she first resigned. If anything her posture made her look more resilient and even more sure she had been right.

She was greeted at the Palace as she handed in her formal resignation (Picture: PA)

‘She explained her ‘bold’ philosophy in a way that she maybe should have done when she first took over office.’

She added: ‘There was a little more blusher on her cheeks, suggesting a worry about looking drained, but those cheeks kept rounding intermittently as though still sharing something of a cynical joke with the public.

‘There was a fluff on the line about the Roman philosopher and a large gulp during one pause that could have been down to inner tension or emotion but it never spilled over in her external messages.’

Truss quickly made a dash for Buckingham Palace following her speech, as she formally resigned, handing her resignation letter to the King.

Now she says she will continue to sit as a backbench MP for South West Norfolk.