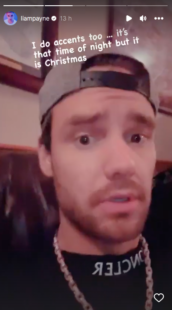 Liam Payne has become somewhat known for his ever-changing accent – who could forget his post-Oscars interview?

Now, the One Direction star has treated his fans to something a little different by doing his best impression of late star Elvis Presley.

Liam, who went viral when he spoke with a Dutch/Irish/American/Italian twang on Good Morning Britain earlier this year, seemed to poke fun at the meme as he let his hair down on karaoke night.

The tipsy 29-year-old hung out with a bunch of friends, with partygoers singing loudly to David Allan Coe’s You Never Even Called Me By My Name.

Filming himself for his Instagram Story, the Strip That Down hitmaker put on his own Southern accent and threw in a few ‘uh-huh-huhs’ for the ultimate Presley voice.

He even did the lip, showcasing his ability to embody the Presley swagger.

Liam jokingly wrote on his post: ‘I do accents too… it’s that time of night but it is Christmas’.

The For You singer was accompanied by new girlfriend Kate Cassidy, 23, whom he started dating earlier this year.

Kate kept things casual as she lounged on the sofa and enjoyed the antics of karaoke night, shying away from the camera and covering her face with a giggle as Liam turned his phone in her direction.

Liam even did the signature Presley lip (Picture: Instagram)

He was joined by girlfriend Kate Cassidy, who chuckled in the corner before hiding her face (Picture: Instagram)

Liam and Kate made their public event debut at the start of December at the Fashion Awards, both looking super stylish.

It was the first time the two attended a red carpet event together after they were first pictured together on Halloween, when they dressed as Pamela Anderson and Tommy Lee, before being snapped again on a dinner date.

Liam was previously engaged to Maya Henry, then enjoyed a short romance with Aliana Mawla before getting serious and going Insta-official with Kate.

Thousands of homes could be without water on Christmas Day

But Kate, an American citizen of British heritage through her father, is now thought to be ‘mad’ about Liam – and him about her.

An insider told The Sun: ‘They are mad about each other. Kate is a wild girl so Liam is definitely in for a fun ride. She is always out in nightclubs and seems to be loving London.’


MORE : Victoria, David and Harper Beckham get very competitive as family battles it out to make the best gingerbread house


MORE : Judi Love heartbreakingly shares she was told to ‘lose a stone’ to look ‘so much nicer’ by an ex